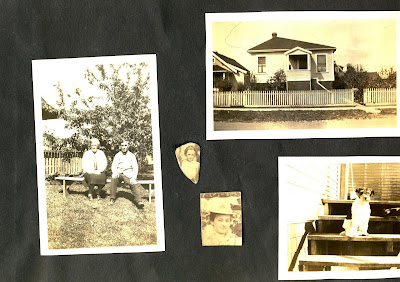 Since the theme for this 6th Edition of the Canadian Genealogy Carnival is Home Sweet Home and one of my objectives for August was to do more research on the home and neighbourhood where I grew up as well as on my grandparents' and great grandparents' homes here in Vancouver, I thought I'd share a bit of the information I've recently found as well as some photographs. This Edition of the Canadian Genealogy Carnival is being hosted by Looking4Ancestors.

The house photograph above, from one of the pages in my Grandma (SAGGERS) ROGERS album shows the house on Chester Street in Vancouver where my dad grew up. (That house is still there, although it doesn't look quite the same.) On your left is a photo of grandma and grandpa shown in their yard. (Yes, grandma did glue those photographs right into her album. Sigh...)


Both my grandparents and my great grandfather SAGGERS lived in what was then the District of South Vancouver much of the time and I did look through records in the City of Vancouver Archives concerning these properties. Some early water and assessment records are missing for South Vancouver, but I found others, including building permit registers from 1912 on and the 'Plumbing Record' from 1910 to 1912.


In the South Vancouver Plumbing Record, I saw that in 1914 my grandfather ROGERS added a bath and basin to his house, the same one shown above. This is the year before he was married. I wonder if he was thinking about it then?


In 1921, great grandpa SAGGERS added a water closet, bath and sink to the house he lived in and in 1924 a water closet, bath, sink and basin to another. Both these houses were on St. Albert Street. (I'm not quite sure here of the difference between a basin and a sink, unless one's in a kitchen and the other in a bathroom.)


Then from my excursions in August over to my childhood neighbourhood near 17th and Cambie in Vancouver, here are 2 photographs showing our old house as it is now. 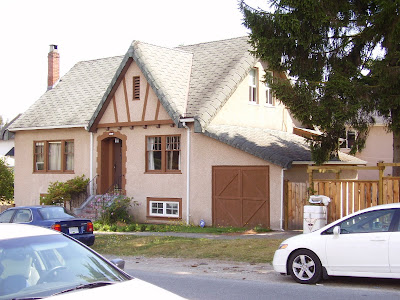 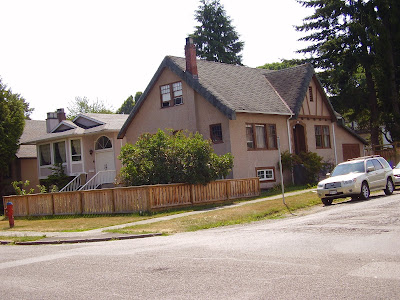 When we were there, the front yard wasn't fenced in and there were hydrangea bushes by the house. We kids got to 'plant' old nails in the ground beneath them. This was supposed to make the flowers bluer.

The back yard was fenced, but it wasn't this private, and those trees - my goodness, they weren't even planted when we left - look how high they are now. This has made me realize just how much time has gone by!


That washing machine outside wasn't ours, but in my childhood, we always had one. What a lot of work washing was for Mum even with that 'convenience'. We had a line outside to dry clothes when it was fine and inside too for times it was raining. 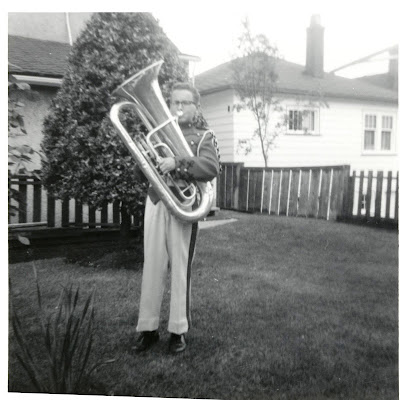 Although a number of the houses I remember are still there, property anywhere in Vancouver is now expensive and many smaller, older houses have been replaced, like the 'little house' that was once next door. Here's a photo I took in the 1960s of my baby brother blowing his tuba out back. You can see our garage and fence and one of the holly trees behind him, as well as part of the now demolished house that was beside ours, the WALKER house.

As for my own August genealogy plans, I had three main objectives:
1. to visit Chown Memorial Church in Vancouver to take some photographs of the garden where my Na's ashes were scattered.
2. To research my childhood neighbourhood further in Vancouver street directories.
3. To visit the City of Vancouver Archives to research - the Vancouver School Board in the 1950s when my father was on the Board and the names of the previous owners of both houses we lived in when I was young.
And, 4. to do some new Internet and BMD and directory research on my BROWN/IRWIN/LEITCH and IRWIN/RICHES/ROPER families.

I'm pleased to say that I was able to make time to do all of this, (although my School Board research was mostly in newspapers, as at the City of Vancouver Archives, I was seduced into looking at some other records not on my list. Next visit!)

And, as a 'bonus', I re-sorted my ROGERS papers, putting them all in acid free envelopes and files and labelling them where appropriate. Any that aren't scanned (quite a few it seems) are now on my priority list.

I deliberately haven't made any specific personal genealogy plans for September or October as I know these will be particularly busy months for me. But I'll be making plans for November/December though - and soon.
Posted by M. Diane Rogers at 9:16 PM

You're lucky to have several special photos like these.
As always, your article is a reminder to check out the property records for my ancestors' Bathurst, New Brunswick property.
So much to do - so little time!
Evelyn in Montreal