Today is the first day of my 21 Day Family Connections Experiment.

Here's my first family object to write about.

In fact, for the last few months, I've been using this again, although it had been tucked away in a kitchen cupboard for a while. I'd broken my much newer one cup measure and thought I might as well use the old one. 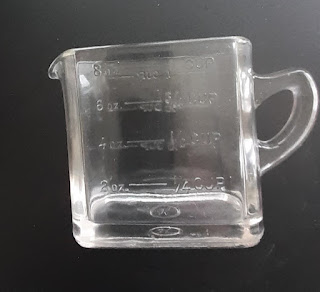 This belonged to my maternal grandmother, my 'Na'. I can vouch for that. I'm not that sure when she got it but since I remember it always being used, I am confident that it was among the belongings she packed up to send to Vancouver, BC, Canada when she came here to live.

During WW II, she and grandpa had been living in Hamilton, Ontario as he had got a job at Dominion Glass. From what she told me, I think she was quite happy there. She mentioned friends she made and church activities. My mum, their only child, was by then away in the Canadian Women's Army Corps, for the later years of the war, in Washington, DC. Na did visit her there.

Mum married in 1946 and she and dad had decided to live in Vancouver.  By the end of 1946, they had driven up to Canada, the car full of their stuff, and visited relatives, including her parents, along the way to a new life in Vancouver.

But within the year, they learned grandpa wasn't well. He died in Hamilton in August of 1947. I believe it took Na a bit to decide what she'd do, but sometime in the next year, she followed mum and dad to Vancouver. I know she told me about going back home to Newdale, Manitoba, then packing up everything she could to be sent on the train. I believe this one cup measure was among the things she brought.

I had always thought the rectangular shape a bit unusual, attractive even. But I never noticed the logo on the bottom till I thought about writing about it the other day. Of course, I had a look with Google. I did find a couple of images of similar cups. I tried to look up the logo on the glass, although that didn't seem to pan out, but then I saw a reference to Kellogg company 'premiums', and when I added that to my search, I found a reference to the cup's shape that suggested it was meant to fit into a cereal box. At that point, I thought (as I often do) -  newspapers! And indeed, although I haven't found a reference yet to a Manitoba or Ontario Kellogg's ad, I did find ads which ran elsewhere in Canada in the 1930s and 40s, including British Columbia, like this one from the Chilliwack paper in 1936.

If this is indeed one of those free measuring cups, it's certainly stood the 'test of time'. And while cleaning out my cupboards, the other day I found a newer cup which I'm using.

But now, when the 'kids' see this old cup they'll remember, I hope, that it has a little more family history attached to it. 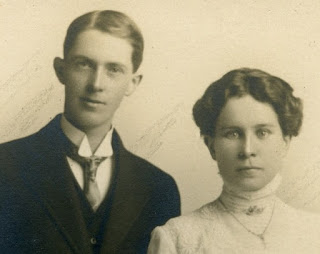 Looking forward to having that cup :)