Shown here are two more of my ‘stray photographs’. One is a photograph; the other a postcard. Neither has anything written on the back.

The photo has a label written in ballpoint pen is: 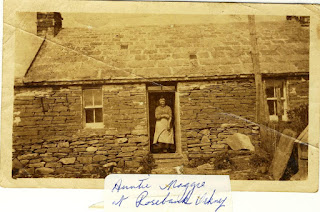 The postcard reads in ballpoint pen: “Rosebank in foreground where Aunt Maggie lived”. Its title reads: “The north side and Brough of Birsa”. 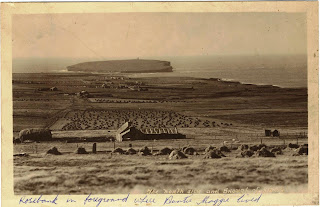 No further information on either photo is available at the moment.

I feel sure someone somewhere knows of ‘Aunt Maggie’ who lived at Rosebank, in the Orkney Islands in Scotland.

These photographs were found far off, in British Columbia, Canada, so there may still be family here in Canada.

Please comment or contact me if you recognize Aunt Maggie from Rosebank in Orkney or even the house or farm at Rosebank.  I believe there's more than one Rosebank. but this was in Birsa.
Posted by M. Diane Rogers at 1:41 PM

I also have stray ancestors in my photo collection. This is a good way to seek possible connections.

Hope you find the owners. Regardless, the photos are quite interesting.

I hope you find the owners and I love that you are trying to return the pictures “home”. Beautiful pictures.

Thanks all for your comments. I love to look at photographs and it's a great way to make connections.