Once again a personal post topic - and once again I'm a bit late for Saturday night. I was out celebrating with family and friends last night - that's my excuse this time.

Over at Genea-Musings, Randy Seaver for his Saturday Night Genealogy Fun asked us to:

1)  Go to the Baby Name Wizard site and see how popular your name was over the 20th century, and how popular a baby name it is today.  Check out your spouse, your children and your grandchildren (if you have some!) also.

2)  What does your name mean (find out on http://www.babynamewizard.com/baby-name)?

According to the wizard, my name's popularity as I spell it, seems to have peaked in the 1950s - after my naming time! (These stats, I believe, are mostly, if not all, from the United States.)  I never really liked my name but others must have, or at least their parents did.

Since there are name variations, I did do as Randy did and searched for Dian* names. (I did take a look at Deanne, Deana, Deanna too but maybe that was cheating, since I wouldn't pronounce those the same way. They sound better than plain Diane though, and I did attempt to change my name's spelling once to something like Deanne, but people just wouldn't co-operate.) 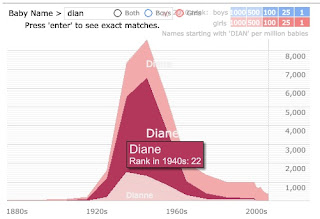 Then, I thought it might be fun to check out the popularity of another name my mom considered for me - Lynn. 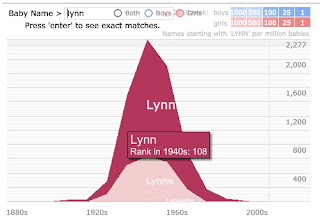 Mmmmm...neither is very popular now. Perhaps one day both will sound unique as well as antique?

On the same site, I was able to look at the meaning of my name - which I've always been quite happy about.

Both the names Diana and Diane were "derived from the Latin Diviana, which is from divus (divine). The name is borne in Roman mythology by the virgin goddess of the moon and of hunting." - from A World of Baby Names by Teresa Norman. Information accessed at www.babynamewizard.com 25 November 2012.

In classical Greece, however, the goddess Diana was Artemis (I'd have liked that name) and her arts were associated as well with childbirth and women's health. See for instance, the entry for "Artemis" by Ron Leadbetter in the Encyclopedia Mythica.

Now the graphs above don't necessarily reflect the popularity of these names in Canada where I live, so I just had to have a look to see what information there is about names in British Columbia, Canada, my home province.

Here is a chart from the British Columbia, Canada Vital Statistics Agency showing the popularity of variations of Diane in BC from 1912 on. I also included Dinah, which I've seen as a variation.  In BC poor Dinah seems to have been favoured only for a short time - I wonder if that was for the actress, Dinah Shore? 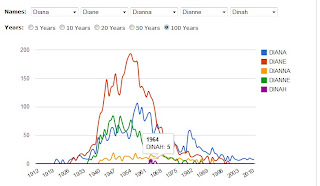 And I compared 'the basic' Diane and Lynn names' popularity in BC as well. Diane seems the winner there, although not very popular now, but if you compare the two names Diane and Diana, in more recent decades Diana as a name has overtaken Diane in popularity in BC, likely due to the influence of the late Princess. 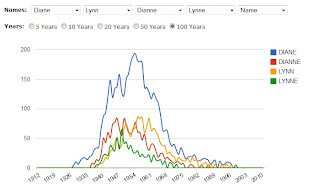 One name I'd have liked to have doesn't even appear in the BC list (perhaps there are no examples after 1912), but there is a very modern equivalent shown. I was 'pleased' to see though that the popularity of my other name - the one I don't use and don't want mentioned - has since 1912 declined pretty steadily, then faded to nothing in the 60s!
Posted by M. Diane Rogers at 2:59 PM