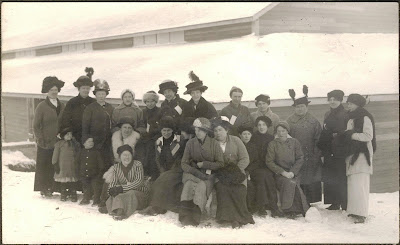 Canadian prairie women were (and are) avid curlers. The historical newspapers often mention 'ladies curling', but seldom seem to give the women's names. (The men do often have their names published.) I believe this photograph, from a family collection, shows a group of Newdale, Manitoba, Canada women and children at a curling event. I suspect the 'ticketed' women must be the members of the women's team. Unfortunately, there's no identification with the photo, but I do recognize my Na in the front row and a few other women. If you recognize someone, please do let me know.
Curling was always a big sport in Newdale - 2009 was the 100th anniversary of the Newdale Curling Club. My grandmother talked often about the year she was on a trophy winning team and she displayed the team photograph in her apartment. Silly me, why did I never ask her exactly which year that was? Researching that is one of my goals for 2010.
Posted for the 8th Edition of the Canadian Genealogy Carnival, hosted by Looking For Ancestors.
Posted by M. Diane Rogers at 11:22 AM