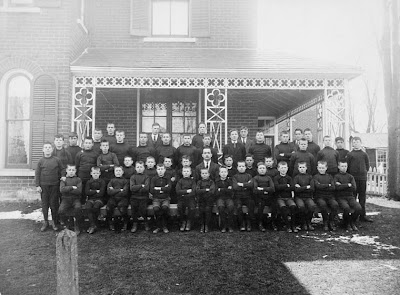 Today the Australia government is apologizing to the "forgotten Australians" - those who as children were in government homes between 1930 and 1970. ["Ordeal of Australia's child migrants" by Nick Bryant.
BBC News, Australia, published Sunday, 15 November 2009.]

This includes many sent from Great Britain to Australia as child migrants in a great number of organized emigration schemes supported by governments and other agencies. Thousands of British children were also sent to other parts of the Commonwealth, including Canada and South Africa and there have been calls for some time for other governments to apologize, including the British and Canadian governments. I was surprised myself to see the comments attributed to Alykhan Velshi, spokesman for Immigration Minister Jason Kenney, saying that the child migrants' experience was "different" in Canada. ["Canada won't apologize to British home children" by Gloria Galloway, with a report from the Associated Press. Globe and Mail, published Monday, Nov. 16, 2009. See also "Canada shows no sign of apology to migrant children" by Tiffany Crawford, Canwest News Service. Published Global News, Monday, November 16, 2009 ]


It appears that the British government is seriously considering an apology, but that Canada will not, although Canada may be willing to approve some kind of commemoration. Right now, there is a bill in the Canadian Parliament to have 2010 designated as the Year of the British Home Child in Canada which, according to information in the Globe and Mail today, Canada's Immigration Minister Jason Kenney supports and according to Global News, Alykhan Velshi, spokesperson for the Minister, has said the request for a Canadian stamp honouring the home children has been approved.

From the 1860s to the 1940s, some 100,000 children were sent as 'child migrants' to Canada. Here they were known as 'home children' - the term used by most researchers in Canada today. Certainly not all were treated badly in Canada, but even those who found new and happy homes, usually lost their connection to family in Britain, or in some cases, even to other family in Canada - siblings were often separated - a loss which many regretted and which their descendants are still working to correct.

Since this is a topic of interest to many in Canada and now is in the news, I'm including here a selected list of sources of information and a very selective timeline.

My list is not exhaustive, but is meant to get you started if you are interested in this aspect of Canadian history, or if you are descended, or connected, as I am to a 'Canadian home child'.

The Quarriers Story, One Man's Vision Which Gave Over 40,000 Children a New Life by Anna Magnusson (Toronto: Dundurn Press, 2006).

The Little Immigrants: The Orphans Who Came to Canada by Kenneth Bagnell (Toronto: MacMillan of Canada, 1980).

The British Home Children, Perry Snow, author of Neither Waif Nor Stray:
http://freepages.genealogy.rootsweb.ancestry.com/~britishhomechildren

Child Emigration, Your Archives, National Archives of the U.K.: http://yourarchives.nationalarchives.gov.uk/index.php?title=Child_Emigration

Note* Some records may be restricted, for example, to proven direct descendants only. Some research may involve a fee.

The National Archives of the UK - Home Office, Poor Law Union and Board of Governor records (Some available at local archives, including workhouse records). Also passenger lists, outbound (see http://www.ancestorsonboard.com/ )

Barnardo’s - case files, including some for Macpherson and Marchmont children, 1882-1939. Fee for search and copies.

And the publications of each group involved, for example, the Canadian Barnardo magazine “Ups and Downs” (see TweetyBird Genealogy for a list of known copies) and the Fegan’s Homes newsletters (being reprinted & indexed – see Global Genealogy: http://globalgenealogy.com/countries/canada/home-children/resources/101041.htm )


- Maria Rye buys property at Niagara on the Lake.

1874 - Local Government Board in Britain appoints Andrew Doyle to report on inspections. Many concerns covered in British papers.

Abt 1878 - All Quarrier and some other Scottish, and later Barnardo children go through Marchmont Homes. Ellen Agnes Bilbrough in charge. (Home closed 1925.)

1922 - Empire Settlement Act – Britain and Canada agree to pay $40 towards cost of sending each child overseas.

1938 - Last? Quarrier group arrives on the ‘Duchess of Bedford’.

I enjoy your blog and I have nominated you for a Kreativ Blogger award at my blog www.thearmchairgenealogist.com

Thank you very much, Lynn!

I was one of the small Canadian contingent (7) that was invited to London for the formal apology. It was an honour and I felt Prime Minister Gordon Brown was very sincere with the apology. I was a bit irritated as all the speakers emphasized the hardships suffered by the Australian Child Migrants. Other than the Prime Minister, who did include Canada, New Zealand,South Africa and Tasmania, there was no mention of the distress endured by so many of Canada's Child Migrants.The Aussies received their fair dues, but it is too bad Canada and the others did not receive similar treatment.The total Child Migrant Scheme had it's good and bad features no matter which country we were shipped to. Roddy Mackay, Middlemore Homes 1940-41 Fairbridge Farm School 1941 -51
PS Too bad that our own Canadian Prime Minister did not see fit, to follow the decent example, set by the Prime Ministers of Australia and the UK

Thank you, Roddy, for your comments.
For those who didn't see this, here is a link to a BBC video showing Prime Minister Gordon Brown's statement in the UK Parliament and other parliamentarians' responses:
-"Gordon Brown apologises to child migrants sent abroad"