84th Edition - What the Carnival of Genealogy Means to Me 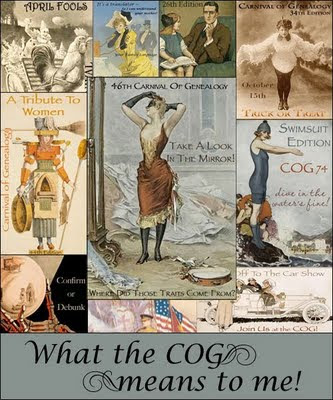 It’s time for the 84th Edition of the Carnival of Genealogy. Created and managed by Jasia at Creative Gene, the Carnival is now three years old.

This Edition’s topic - What the Carnival of Genealogy Has Meant to You - was an opportunity to look back and reflect on when you first discovered the COG and when you first participated in it.

I think we genea-bloggers need to think a bit more about our own history – even Jasia isn’t sure how many people have participated over the years - and this topic is a way to ensure that we take note of the Carnival of Genealogy’s heritage.

My first Carnival post was on the last day of 2007. I’d been blogging since 2005. There weren’t many genealogists blogging then, but by late 2007, there were a good number and, after I met Thomas MacEntee of the Destination: Austin Family on-line, I was encouraged to enter the 'Advent Calendar of Christmas Memories'. I’ve always loved Christmas, so writing about it came fairly easily. Then it seemed very natural to participate in the Carnival of Genealogy with some of the same people. Very appropriately my first post was in the 2008 New Year’s Resolutions - the 15th Edition of the Carnival of Genealogy hosted by Jasia. I believe I’ve participated in 27 since.

One of my very favourite Carnival topics was the 41st Edition in February 2008, ‘Dinner Guests from the Past', hosted by Jasia. My own post was 'Vancouver Style’, of course. (That's my home!) All these posts involved some thought and quite a bit of imagination as you'll see when you have a look.

In September of this year, I was the host for the 79th Edition, ‘Reunions’. This experience helped me to appreciate all Jasia’s hard work, but it was also a lot of fun for me and a great read for all! I’d certainly like to host another in 2010.

Since I’m intending to publish something for my family in a year (or two), Carnival topics have been a great way for me to organize shorter articles which can be developed further later. One Carnival, the 45th Edition hosted by Jasia in April 2008, ‘Cars as Stars!’ for which I wrote about 'Jenny, the Rogers' Family's Star Car!', is a favourite of my baby bother – he still has that car – so that’s one I worked up into a longer piece.

I certainly recommend that genea-bloggers participate in this Carnival. It’s a great way to ‘meet’ like minded people on-line and to have your own writing noticed by others. I love writing and reading posts with photographs, and any about women's history as well, but you’ll find yourself ‘stretching’ once in a while to write about an unfamiliar or even an uncomfortable topic. It’s much easier to do that in a familiar Carnival structure and from Carnival of Genealogy participants you’ll get supportive and helpful comments.

In fact, I think participating in the Carnival of Genealogy is a bit like getting together with family and old friends. When it’s late in the day, you all get to talking and laughing (usually) either sharing memories about the olden days’ – with all the ‘remember when s’ – and the ‘did you ever? s’ – or maybe you're all hotly debating what you think the future holds. This is just what we’re doing here in the Carnival of Genealogy. Come join us! 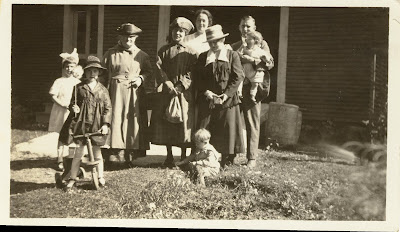 BATES, SCOTT family get together, in Montpelier, Vermont, at the Bates home, c. 1920.

Postcard, Made in Canada, black & white, unmailed. I believe the photographer was my grandfather, James Walter Scott from Newdale, born in Nottawa. People identified by Amy Estella Scott in the 1960s.