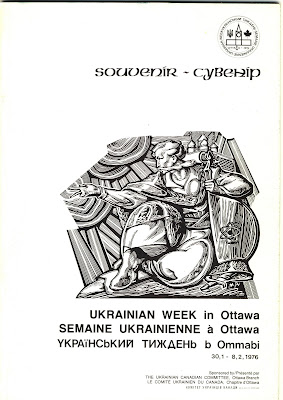 The image shown on the front cover is a 'bandurist', a singing minstrel ..."known for his songs of heroism and valour."

From school in the 1950’s and later in university courses, the most vivid image of Canada’s immigration policy from the 1890’s was of the immigrants in ‘sheepskin coats’ – the Ukrainian families who were encouraged to emigrate to Canada and take up land on the prairies – in Manitoba, Saskatchewan and Alberta. I do know something about Canadian immigration policy and prairie settlement, but almost nothing about Ukraine’s own history, so that’s where I decided to start.

The book I chose to read first was Ukraine: An Illustrated History by Paul Robert Magocsi (Toronto: University of Toronto Press, 2007). I did a search about Ukrainian history writing and browsed a couple of library’s shelves first. I picked this particular book because, in his introduction, Magocsi says that “History can best be understood when the reader has access to maps" (p. ix) and I could see right away that maps appear throughout the book and complement the text, photographs and other illustrations. I know that for myself when I am learning about a new place, the first thing I reach for is a map or gazetteer, so I liked Magocsi's style.

Paul Robert Magocsi is the Chair of Ukrainian Studies at the University of Toronto in Ontario, Canada, the editor of The Encyclopedia of Canada's Peoples and the author of a number of books and articles. I was interested to see that much history of Ukraine has been written by Canadians and sponsored by Canadian organizations.

I found Ukraine: An Illustrated History a very readable, well organized and balanced history. Magocsi’s study of Ukrainian history involves a “territorial, or multicultural approach” (p.ix). He stresses the importance of Ukraine's historic regions, even when their boundaries have extended beyond present-day Ukraine and he looks, however briefly, at all the various ethnic groups who’ve lived in these regions. Little history worth reading is without controversy, and I know Magocsi’s multi-cultural approach, particularly concerning the Rusyns, has been criticized, but those new to Ukrainian history like myself will likely appreciate his "territorial" approach. I did find some of the sections on World War II less balanced, even troubling, though.

Ukraine: An Illustrated History covers the history of this area from the time of its first semi-permanent settlements to almost present day. The introductory chapter on physical geography was too short for me, and since the book is only 308 pages, no early period gets too much attention. About a third of the book covers Ukraine’s history after World War I. Although there is little detail about the period I am most interested in, 1890-1914, this is certainly a book well worth reading for background history alone and it has spurred me to read further.

Ukraine: An Illustrated History has 46 maps as well as 16 charts (mainly dealing with population), a good index and excellent illustrations. The only thing missing, I think, is a note on ‘further reading’. However, since Magocsi himself has written many other books, including two general books on Ukraine – A History of Ukraine (Toronto: University of Toronto Press, 1996) and Ukraine, a historical atlas written with Geoffrey J. Matthews, cartographer, (Toronto: University of Toronto Press, 1985) likely I will continue on with these.

In addition, I am currently reading two other older histories which I am finding helpful: Peasants in the promised land: Canada and the Ukrainians, 1891-1914 by Jaroslav Petryshyn with Luba Dzubak (Toronto: James Lorimer & Co., 1985) and Early Ukrainian settlements in Canada, 1895-1900: Dr. Joseph Oleskow's role in the settlement of the Canadian Northwest by Vladimir Julian Kaye (Toronto: Ukrainian Canadian Research Foundation, University of Toronto Press, 1964). Both these books are based in large part upon archival sources and discuss to some extent the history of Ukrainian attitudes towards emigration. Kaye’s book is very detailed; Petryshyn’s doesn’t neglect the history of Ukrainian Canadian labour and radical politics. Both books are indexed; Kaye’s book even includes a surname index.

To read more about this Carnival of Central and Eastern European Genealogy, go to:
Jessica's Genejournal: http://jessicagenejournal.blogspot.com