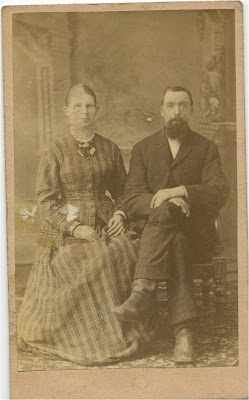 The 1st Edition of the Canadian Genealogy Carnival. The topic: Introduce us to your Canadian ancestors. Who were they? How did they get here? Where did they live? Did they move? Do you still have family in Canada? Share with us a bit about your Canadian roots.

Since I live in Canada, as do most of my ‘known’ relatives, much of my research was initially in Canadian sources. I am now researching also my husband’s family, all of whom emigrated from Sweden to Canada beginning about 1906.

My own surnames of interest –


My father’s paternal grandparents, Mary Ann WHITE and William ROGERS, came from England to Ontario, Canada in the early 1870’s. William was from Somerset, England; had been married before and after his wife died, had left his young children in England with his parents. Mary Ann, I believe, came from London, England, but she remains a bit of a puzzle. They were married in Toronto, Ontario in 1873; my grandfather was born there in 1878. William worked as a labourer and died in 1887, Mary Ann in 1897. Their son, Joe, migrated to Nelson, British Columbia at the turn of the century, then to Vancouver.

My father's maternal grandparents, Sarah Ann Staines and David Saggers, who were married in London in 1874, came to Vancouver, Canada in 1907 from Cambridgeshire and Hertfordshire, England. All their children also emigrated to Vancouver. David worked as a parks attendant and a gardener in Vancouver and Sarah Ann and David both died in Vancouver, Sarah in 1909, and David in 1935.

My mother’s paternal grandparents were Mary Janet Wood, born in Bean Hill (Norwich area), Connecticut, U.S.A. and Walter Scott, born in Scotland, likely at Dalmeny. Mary Janet, or Jennet, came to Simcoe County in Ontario, Canada as a child with her parents, weavers, after 1860. Her parents had emigrated to the U.S. from Yorkshire, England in the 1850s. Walter Scott emigrated to Canada about 1854, from Galashiels, Scotland. They were married in Nottawa, Ontario, in 1883 where Walter worked as a book-keeper, merchant and farmer. (Walter had been married before, but had divorced his wife for bigamy.) Walter and Janet soon had four children, but Walter died in 1892. Mary Janet lived till 1944.

My mother’s maternal grandparents were Janet Carmichael and William Irwin. Both were born in Canada in what is now Ontario – William in Darlington, Durham County and Janet in Islay, in Victoria County. William’s parents were from Cootehill in County Cavan, Ireland; Janet’s from Islay in Scotland. According to the family story, they met at a Canada confederation celebration in 1867. They were married in 1876, and by 1881, William had decided they’d move west to Manitoba. They and their baby daughter, Mary Jane, settled in Newdale where William had a farm and a lumber business. William died in 1918, Janet in 1927.

I thought it might be interesting to mention what I consider my ‘greatest’ Canadian find.

That’s Diana Gilchrist, here shown with her husband, Alexander McNab. As a girl, I was often told that my name, ‘Diane’, just came ‘out of a hat’. When I started doing genealogical research, I was very excited to ‘rediscover’ Diana, who was the half sister of my maternal great grandmother. She was married in 1870 in Victoria County, Ontario but died in 1882, leaving a young family. These children all migrated west as adults. Some lived in Newdale, Manitoba where her sister, Janet, also lived.

We did have her photograph and some photographs of her children. My Na had identified these for me when I was a girl, but, I thought of them as Newdale residents, and probably at least distant relations. If she told me then our closer relationship, I just hadn’t taken it in. (Sorry, Na.)
Posted by M. Diane Rogers at 11:32 PM

I am interested in Mary Ann ADAMS, who may have been a daughter of Thomas and Elizabeth ADAMS of Cheddar.

I have posted an email to you direct, but will also watch this space for a reply.

I am interested in Thomas and Elizabeth ADAMS from Cheddar who, if we are talking about the same couple, may have married in Wanstrow Somerset in 1809.

I look forward to hearing from you. My email address is philcandy-at-hotmail.com

Diane, I'm glad you are a part of the first CGC. I love the photograph. My ancestor, Edward Irwin came to Canada from Ireland. Perhaps we have a connection.
Kathryn