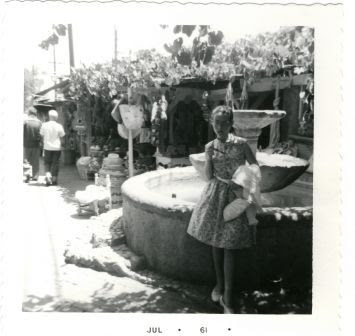 Diane at the hotel in her new outfit, Los Angeles, California, U.S.A., Summer, 1961 (bought with her own hard saved money). 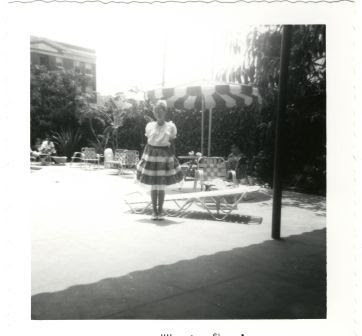 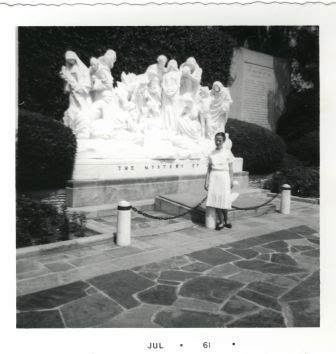 Today I'll be participating in the Scanfest for the first time (well, I hope so anyway - if Windows Live Messenger continues to recognize my various identities).

I've pulled out some more of my mum's photos to scan - had to have a good look again last night and mull over some of the family connections, of course. (I think I just found an address for one 'lost' relative by searching with Google this morning!)

Here are a couple of my mum's photos from our trip to California in summer 1961. These three are of me. Funny, I still remember all these outfits; one I still have in my trunk - guess which one.
There are a few photos from Forest Lawn Cemetery which was one of the 'highlights'. My mum wasn't so interested in the burials though, as the art replicas and buildings, including the Wee Kirk o' the Heather church, "a faithful rendition of the village church at Glencairn, Scotland, where Annie Laurie of Scottish lore worshipped". I do remember seeing through this church, but oddly, I don't remember my mum ever mentioning that her cousin, Margaret Agnes DRUMMOND was married there in 1949 (to Andrew Joseph SMITH), although I do have the wedding announcement card here in the 'IRWIN' file. Margaret's mother was my 'Aunty Grandma' (great aunt Maggie IRWIN).

No baby bother along on this trip. Lucky really, as when leaving the cemetery, mum and I were hit by a car and ended up going to hospital in an ambulance. We weren't badly hurt, but we were shaken and bruised. I remember Mum didn't want to call Dad and tell him about it as he'd be sure to tell her to get us right home. She waited a day, and we continued to limp along on almost all our planned excursions.
Why waste our time fussing!

I'm so glad you joined us for Scanfest, Diane! And, a connection: my hubby has ancestors buried at Forest Lawn, too.