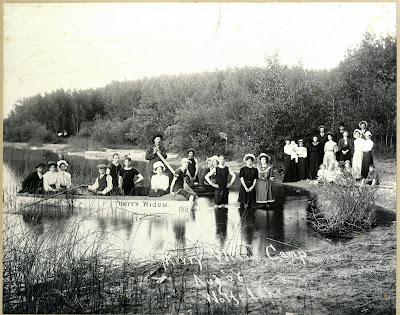 As I read the topic for this Carnival of Genealogy – “Swimsuit Edition”— this family photograph came to mind right away. It’s a clear favourite of mine – the bathing costumes alone are worth a good look. That’s my Na, Amy Estella Irwin, wearing the darker bathing dress and standing in the water. (She’s my mum’s mum.)

I’ve tentatively identified a few other people in the photograph, but not the place it was taken. Written on it is “Merry Widow Camp Aug ’08 Wolfe Lake” and apparently painted on the boat is “The Merry Widow 1908”.

I’d always thought the ‘Merry Widow’ reference meant that this was a local summer excursion or holiday, perhaps during the week when husbands weren’t able to stay. (The Merry Widow operetta came to Broadway in New York in 1907 and the music very quickly became well known. I loved the ‘Merry Widow waltz’ as a girl, but that’s another story.)

There is a Wolfe Lake in Manitoba, Canada, but it’s far, far north of Newdale where Na and her family lived. Could this have been a local name for one of the lakes nearby?

Although there’s no photographer’s name or information given, I do think it’s a Newdale area photograph as there is at least one other professional looking photograph identified in what seems to be the same handwriting. That shows the ‘Newdale Gun Club 1908’. My grandpa-to-be, James Walter Scott, is in that picture, but not in the ’Merry Widow one. He would have been clerking in a store in town in 1908.

Na looks a bit saucy here – she was a bit of a flirt, even in later years. I do wonder if she and the other two younger woman weren’t along to watch the children, so I hope they did have a good time at the ‘Merry Widow’ camp – all good, clean fun, of course.

Love the photograph, another one of those where you wonder if they really ever got completely wet.

A guess for your "Merry Widow Camp" and Wolfe Lake. Might this work?

The area has been named this for over one hundred years. Were any of your ancestors or their friends in mining?

I don't think they got wet either! What a cool photo!

That's a very interesting idea, footnotemaven. No, no one was in mining, but Na's family did come out to British Columbia many times when she was young. Her father owned property in Vancouver, liked to visit but preferred to live 'on the sunny side of the street' in Manitoba.
I still think it's likely a Manitoba photograph but I will keep my eye out for any similar other Vancouver Island photographs. And, I'll have a look in the Winnipeg paper (there are often short chatty reports about Newdale) to see if there is mention of anyone visiting 'the Coast' in August of 1908.

What a terrific photograph - and Canadian, too! Thanks for sharing.

DIANE, You've got one of the best photographs I've seen showing water/beach recreational activities from the 1900-1910 period. Thanks for sharing the photo --- hope you can determine exact location.
TERRY

Merry Widow was used as a term for the wives left behind at a summer location such as a bungalow colony (which we had up in the Catskills in New York).

From what I've been told, the wives had a chance to hang out, gossip, have fun until the husbands came up from the city Friday night after which the women spent the weekend waiting on the men hand and foot . . .

The photograph is spectacular. As you can see from the majority of the folks who are primly dressed, your "Na" was quite daring. I'm sure she passed some of her audacity down to you :D

This is an amazing picture. I love the "real-life" look of it, even though the subjects are posing for their portrait.

I wonder just how their time was spent near the water...

What a marvelous photo of your family. It's good to have the back-story on it like this. Great work.

I love old photos and yours is a fantastic one for the beginning of the 20th century. I love the variation in clothing from "dressed to the 9s" to the men's swimsuits. Great picture and story.

Not sure which I like best, the swimsuits or the name of the boat: The Merry Widow. How great to have this unique photo of your "Na" that captures the period she lived in!

Thanks, Molly! I do love this photo.