Mom, how'd you get so smart? Carnival of Genealogy 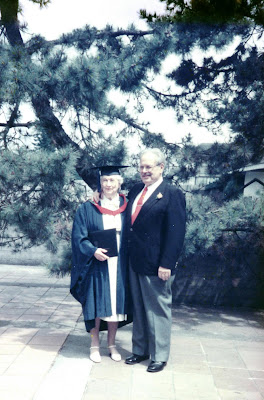 
The topic for this edition of the Carnival of Genealogy is: Mom, how'd you get so smart? We'll examine our mothers' education.

It’s true I don’t know much about my mother’s schooling in her hometown of Newdale, Manitoba. I heard about her friends, and the rides to school sometimes over the snow in a horsedrawn van, but I don’t remember her saying much, if anything, about school itself, or about any teachers there.

For her last year of high school though, my mother moved in to Winnipeg, where she attended Riverbend School for Girls, then a United Church school. (Today known as Balmoral Hall.) I believe this was a formative time for her – I do remember her talking about her Riverbend teachers. She soon went on to business school, then worked at Eaton’s in Winnipeg (Canada’s grand old department and mail order store). She used her business skills all her life; she never got rid of her shorthand book and always knew where every penny was!

While working at Eaton’s, she took courses that Eaton’s offered their employees in sales and sewing and she joined Beta Sigma Phi, a non-academic sorority founded in 1931, as she said, for those women who weren’t able to go to University during the depression.

During World War II, she joined the Canadian Women’s Army Corps and took lots of training there. She married during the war and afterwards, came to live in Vancouver, B.C. She did return to school here for a time, to learn more dressmaking, which she loved, and she soon found Vancouver friends in Beta Sigma Phi.

I think she regretted not going on in school as a girl. A few other women in the family did go on a bit further– a great aunt was a teacher, one cousin became a nurse, for instance, and she had some other models, including Dr. Isabelle McTavish of Newdale, a medical missionary, but mum was not interested in medicine or teaching. She read a lot and was interested in anything to do with archaeology, among other topics. When I went to university, I tried to get her interested in going as an adult student, but she thought she was too old. Somehow though, years after I was gone, she took herself up the mountain here and registered at Simon Fraser University. She received her B.C. in 1983 and continued to attend for many years. She was very happy at S.F.U. and found going to university, even as a 'senior', rewarding.
Posted by M. Diane Rogers at 11:43 PM