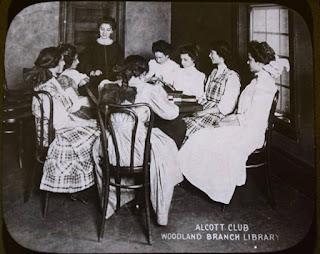 Woodland Branch Alcott Club, 1910s? Cleveland, Ohio, USA; Branch lantern slide. Couldn't resist this photograph. Maybe one of these young women is related to me. Could be...

As of this week, AncestryDNA® has introduced new DNA Communities and updated results. An Ancestry blog post published 1 February 2021 outlines the update and gives some background to the Genetic Communities™. With the update, now there are 33 in Germanic Europe, 151 in the Mid-Atlantic, 138 in the Midwest and 26 in New England. (See image below.)

Altogether 1,300 regions are now offered by AncestryDNA® between communities and ethnic regions. Here is a graphic showing all the new Communities, courtesy of Ancestry. 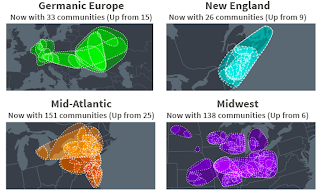 Ancestry had previously identified one Community for some of my DNA matches and myself - "Scottish Lowlands, Northern England & Northern Ireland". This community fits nicely into my known genealogy and with what I usually refer to as my pretty boring DNA story.

Effectively both my parents were only children (Uncle David died very young) so I am challenged sometimes to find close matches. At Ancestry, which certainly has the biggest DNA database for genealogy, I have only 468 labelled as 4th cousins or closer. This may be why I'm so pleased to be able to help others with their usually much grander close match results!

My new Community was unexpected: "Ohio, Indiana & Eastern Kentucky Settlers"; more specifically "Northern Ohio & Northeastern Indiana Settlers".  Ancestry points me to three of my DNA matches, labelled as third cousins, who are now identified with me as belonging to this Community. We are also linked in AncestryDNA Thrulines™ (also based on trees and autosomal DNA results) and have been for a while. None of the three appear in the "Scottish Lowlands..." Community with me.

As it happens, I know quite a bit about the families of these cousins and myself. We are closer cousins than third, but removed, and for sure related via common Scottish and Irish ancestors. I believe we are all in Canada, as were our known common ancestors.

To me, it seems a bit of a warning that the three cousins are quite closely related to each other. Two do have United Empire Loyalists in their direct ancestors, although I haven't looked too closely till now at that as I know another family member already did. And one of the matches at least has family ties to Ohio. I have a close connection to Ohio too, but on a different line.

Now I want to check out that history and genealogy for myself. I'm a bit doubtful that I'll find many close relatives related to me among the "Northern Ohio & Northeastern Indiana Settlers", but I would not be surprised if there are further back connections there perhaps via North Carolina, or certainly Ireland and Scotland.

I'll feel less doubtful if more matches who are not so closely related to each other show up later in this same AncestryDNA® Community. But I'm intrigued enough to work on this for myself.

It's worth remembering how Ancestry defines these communities. It's not necessarily that I have close or direct relatives there.

By this definition, my three cousins and I are a known community already, descending "from a population of common ancestors, people..."from the same place around the same time".

But what about that third cousin who descends in a slightly different route from our other two cousins. Might his other lines offer some interesting tidbits - or even a breakthrough - about our family members or connections? I hope to begin to investigate that for myself soon. I'll try to report back on this by the summer.

I'll be very interested to see what others find in their updates.

If you already have DNA test results at Ancestry, do take a look to see if you have updated Communities.

If you haven't yet had your DNA tested, but you are interested in adding DNA to your genealogy tools,  I recommend you watch Diahan Southard's webinar, aired this morning, "Me and My 1000+ DNA Cousins" which will soon be available free to watch for a week. Or 'forever' if you subscribe to the Legacy Family Tree Webinars. (Well worth every dime, in my opinion!)

This will give you a good idea what you might accomplish after taking an autosomal DNA test. (And after watching the webinar, you'll have a Legacy discount code. Also a code for Diahan Southard's book or mentoring.) Diahan is very positive about AncestryDNA®'s communities and does discuss them in the webinar.