Elsie and her twins are not strays at all, of course, but this postcard is in my Strays collection, meaning (as far as I know) that Elsie and I are not related.
This is a fun photograph which, if you read the postcard back, and look up more about Elsie, tells us something about images of women in the 1950s, but also how women could get ahead, given the best circumstances and a lot of endurance. Indeed, in some of her featured ads for Borden, she spoke her mind. In the 1940s, for instance, she asked "Why should only husbands have a night out?"
I tried to find out if Elsie has ever been on a visit to Canada, but haven't found any border records yet. She's certainly well known here and we'd welcome her, just not right now, of course. 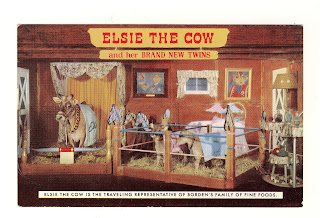 From the postcard back below.
Elsie and her Twins in Person 1957
Elsie is in her canopied bed, the twins in their double size playpen.  For the little ones there's a twin size bassinet for nighttime and a two seater rocking horse for daytime.
For Elsie, there's a library complete with antique victrola. Favorite albums - "Moo-in Over Miami", "Cow Cow Boogie" and "Jersey Bounce".  Favorite books - "The Farmer With Cold Hands", "Calves or Career",  "How to Live on 5,000 Quarts A Year".
Elsie's quite proud of her cowsmetics table made from her grandmother's milking stanchion. Favorite necessities - "Meadow Mud Pack", "Tail Wave Set", "Eau de New Mown Hay".
Elsie's unique Barn Boudoir, housed within a 35 foot trailer, closes into a comfortably compact unit for traveling. 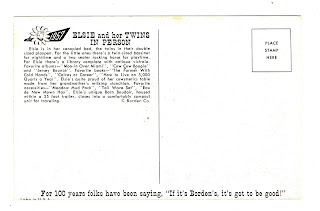 Apparently Elsie, along with several of her FAN group, began working for Borden in the 1930s. Not until the 1939 World’s Fair in New York did she appear 'live'.  She was a hit and has appeared at all kinds of events and other World Fairs. During World War II she sold $10 million dollars worth of war bonds; she's been in at least one movie, and even earned university degrees. And she and Borden published at least one cookbook. I'm on the lookout for a copy.
Follow Elsie on Facebook.
Personal history:
Born “You’ll Do Lobelia,” Brookfield, Massachusetts, USA.
Name change to "Elsie", circa 1939.
Employed by Borden since 1936, an icon in advertising, and still working today for the Borden Dairy Company even during the pandemic.
Married Elmer the Bull. (Yes, he also worked for Borden, but in the glue division.)
Children:
Beulah and Beauregard (private records, born 1940s)
Lobelia and Larabee, twins - according to public records, born 1957.
The twin's name Lobelia is obviously a nod to Elsie's birth name; Larabee's name derivation seems obscure. However, it might point to some family connection. Amos L. Larabee, with Josiah M. Jocelyn, both of Little Valley, New York, USA, filed a U. S. patent application (162,667) for a method of "manufacturing sweet cheese from sour milk" 16 January 1875. Specifications and Drawings of Patents Issued from the U.S. Patent Office, 1875, Specifications of Patents, April 27, 1875, page 1017. Accessible as a free ebook, Google Books.
Read more about Elsie
On the Borden Dairy Company's Meet Elsie page.
At The Life and Times of Elsie the Cow, written by Laurie Kay Olson on May 25, 2016 for Petslady.com.
Posted by M. Diane Rogers at 11:36 PM

When I was a child some 70 years ago, Elsie and Betsy(Beaulah?) and Beauregard the twins used to come to the Canadian National Exhibition in Toronto. I remember that at one point she was a full-cow-size butter sculpture, but I think at first she may have come in person...