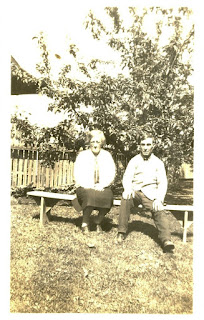 My grandma and grandpa Rogers, 1940s, 5205 Chester St., South Vancouver, BC - Sarah Frances Saggers with Joseph James - Joe - Rogers. The photograph was likely taken by their son, my father, George.


Recently I've been working on a number of personal family transcription projects, including an account of my Na's trip to Alaska in 1954. I'm always interested to see who 'turns up' in the people associated with these project documents.

A few entries have other remarks, for example, the first name of some women. The book is not dated, but does have inside the cover the birthdays of my mum and dad, my little brother and myself, along with a newspaper clipping announcing me as 'Baby Rogers'.

When I first became interested in genealogy I used to ask my dad, her son, who the people were in the few photographs he had. Some he did know, of course, like his aunts. But others? "Oh", he'd say, "some cousin or maybe somebody from church."  Not much help to a genealogist. But over the years, most now have names.

Some in this address book are certainly cousins, some are grandmother's sisters, and her one brother then living. Some may indeed be people from church which was then, I believe, St. Peter's Anglican Church in South Vancouver and, I expect, a number are my grandmother's friends. Possibly a few were customers of my grandpa's.

The addresses are long out of date (but useful for research, of course). Here I've included only names and places. If you recognize a name, please do get in touch or comment. I'd love to hear from you.