Since I'm heading off to Victoria for some research time and a family wedding, I thought I'd post a favourite stray photograph taken there. 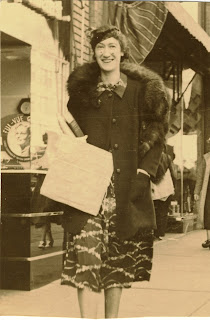 What a happy smile she has! And look - either she's been to the library or she's found one of Victoria's many book shops. Wonder which book that was?

This photo is identified in writing on the back as Grace Adams, numbered '38438' and stamped as 'Candid Photo Studio 720 Yates St., Souvenir of Victoria, BC'.

From what I can see in the window display behind Grace, I think the photo might have been taken just outside the Candid Photo Studio (or another camera related shop). I believe I see an ad or display for a Ful-Vue camera.  These were manufactured from the late 1930s to the 1950s. I love that you can see another lady's white shoes in the shop front facing. They don't look like nurses' shoes, so the photo must have been taken before Labour Day, but after Easter. Maybe it's very early in the season as Grace has a fur piece on, but has only her coat's top button done up. Of course, the weather is always that bit nicer on southern Vancouver Island,.

If you know Grace Adams, please be in touch. Since I did find this stray photo here in BC, it's tempting to think she's the Miss Grace A. Adams I see listed as living in Oak Bay in the 1940s voters' lists, but, of course, Victoria has always hosted visitors from around the world, so she may have been from much further away.