I don't know that I've ever really missed my childhood home or neighbourhood much, but when I was casting around for a topic for Carrie Keele and DearMyrtle's Share A Memory contest, one that might be of some interest to my dear daughter, since DearMyrtle and Carrie are mother and daughter, I thought 'why not describe my room in our old house on Yukon Street in Vancouver?' After all, it was the DDs very favourite colour.

I've written a bit before about the house my family lived in from the 1950s to 1970 – Home Sweet Home in Vancouver, BC, Canada.

One of the photos from that story shows the second floor windows in my room on the north side of our house. Our parents' bedroom was below on the east and the living room was on the west below. Opposite my room upstairs was my brother's. A staircase led to the small second floor landing from the front hall; one step up on either side were our rooms. There was also a small room at the head of the landing, often full with my mother's sewing fabric. Off this little room was an attic where Christmas presents sometimes 'hid'. We weren't supposed to ever go in there.

I remember almost nothing about the room we slept in in our first house on 24th. And I don't remember anything much about my Yukon Street room before my parents 'redecorated' it. I think that was when I was about 7 or 8. It's interesting to me how little I recall at all, in fact as I can remember spending a fair bit of time there, playing with my dolls – I had lots of dolls - and having friends over, and, of course, reading. But I must have taken the room for granted. (But I didn't leave everything from my childhood behind.)

Whatever the room was like originally, at some point my mother decided to 'decorate'. Her theme was 'pink'. (Pretty sure it was Mum! It wasn't me and I doubt it was Dad.) Now my dear daughter loves pink, but it was never my favourite or Mum's either. She may have been swayed by a glossy magazine article, or perhaps, by a sale.

Among her things I found a cute paper colour scheme selector from a company near my parents' business on Cambie Street. Perhaps this is what they used to pick out colours for my room and other rooms in the house.

I've done a little floor plan (quite out of scale). The room was painted pink, and ruffly white crossover curtains went up. A pink chenille spread was on the bed. Otherwise I suspect the room was much as it had been after we moved in. I had a very nice 'french polished' mirrored dresser, a plain wooden dresser painted pink, a couple of wooden chairs, and my great uncle Bert's cigarette table for my night table. The floor was hardwood; there usually was a mat to put by the bed. 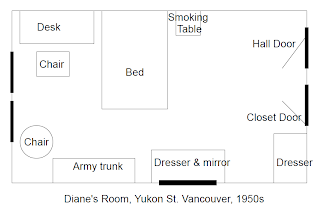 My bed was one of a set of twin beds; Na, my maternal grandmother, had the other. And she had a wooden dresser the same too, which I now have (but hers wasn't pink).

My closet was probably always full (and I bet untidy) as my mother sewed so I did have lots of clothes. Dad built shelves inside for games (and more books which I got at rummage sales -  the eBay of the 50s).

I only remember these two pictures on my walls – 'Cupid Asleep' and an English country scene. (Personal collection)

These had come from my father's parents' home and I've had them ever since. Dad's parents died when I was quite small and it always seemed to me that many things in our family home had been theirs.

Two silly memories do come to mind – first, when we were quite small, my dad used to roll our mattresses up to make 'boats' for us. My mother didn't like this. It would ruin the mattresses, she said, but if we begged, he'd do it anyway. And there never was a key to open Bert's table. Once in a while, I'd forget and close it tight. Dad had a special way to get it open without damaging anything – a tap or two in the right spot. I was never quick enough to learn that. (This table was from my father's parents' house. Grandma's brother, Herbert George Saggers, was killed in France in 1916.)

One year my dad built me a bookshelf to go under the windows; that filled up fast. Later, for high school, a desk appeared, and at some point, my mum let me use her smaller army trunk for my 'stuff'.

Signed photos of my mum and my dad were on my dresser and later on my desk. And from the time I was about 12, my photos included a few old family images my Na had given me, like this one of four generations of Manitoba Irwins, the oldest, James, my great great grandfather, originally from County Cavan, Ireland.
I do remember displaying some of my dolls on the dressers – a neighbour gave me an old perfume display pedestal that I stood the smaller ones on. One grown-up doll was often on a chair. I can 'see' her there in her sparkly dress and pearl earrings.

And I certainly remember the view from my windows of City Hall and the mountains – something I'd like to have still.

There are no photos of my room but I do have these few photos taken from my windows.

The 1958 one would have been taken to commemorate the snow, I'm sure. Snow was always special to us as we didn't get too much of it in Vancouver - and it almost never lasted any time at all.

But why did I take these 1961 photos? I haven't had a chance to research this (yet), but I don't think that haze is the regular Vancouver one, but rather smoke.

There were some bad fires in False Creek, a nearby industrial area, while we lived in that house. If the photos were taken in July 1961, or soon before, I likely can confirm that from newspaper research.

Now as you'll have figured out by now, there is more than the 'pink' reason that my daughter might have some interest in knowing about my childhood room.

Quite a number of the things that were in my childhood room are with me still – the cherub and cottage pictures, great uncle Bert's table, photos and books, Mum's army trunk and the bookcase Dad built for me, for example. One of my genealogy goals this year was to document more of my memorabilia so my children will know who I associate with them, and why I treasure these 'olden' and sometimes useful, or, battered, things.

Sharing these memories of my childhood room has fit right into my plan. I hope the DD (and her brother too) will find something of interest here.