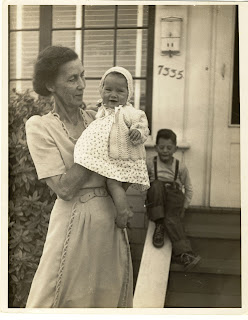 Mrs. Cooper (Polly) holding Diane, July 1949, in Seattle, Washington. Mike Cooper is on the stairs. Weren't we cute? (I may still have that little jacket. Pink, of course.)

Remember those 2012 New Year's Resolutions? I'm working away on one of mine, as I have time, so I'll be ready in April when the 1940 US census starts to become available.

Of course, there are always other byways to explore....and maybe I'll find those Whites right away (LOL!), so I'll undoubtedly look for a few other people in the US in 1940. While scanning some more photos, I noticed an small envelope labelled 'Cooper'. These show the family of Walter and Polly Cooper who were friends of my dad and his family. They moved to Seattle late in the 1930's, I think.

Grandma's book has addresses for the Coopers in Seattle, Washington, and in San Leandro, California.

I did have a little look into Grandma Rogers' album and there are a few more Cooper photographs there, but I do like these.

We must have visited over a couple of days in 1949 as some of the photos are dated. Since there is a house # shown in one picture which is written in Grandma's address book, I am sure these were taken at 7335-18th St. NW, in Seattle. This address is listed for the Coopers, and for "Betty Cooper as was, Mrs. L. L. Widing" [Mrs. Lorents Widing]. 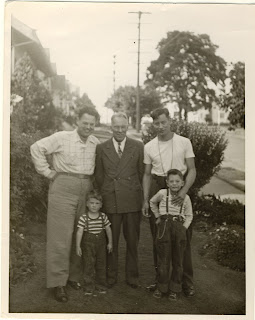 Above, Cooper 'boys', with my dad, George W. Rogers, on the left.
Below, the Cooper family with me. Both photos taken in Seattle, 1949. 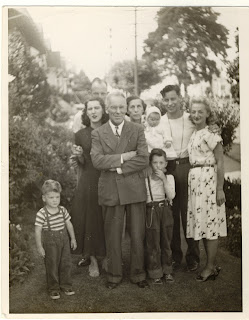