This edition of Evelyn Yvonne Theriault's A Festival of Postcards is dedicated to LOCOMOTION.

Here's a postcard that qualifies in a good number of ways, combining references to both water and rail transportation, and to transportation necessary for making a living and - making war. This is the kind of postcard that a collector like me loves to find - one with a great image and an interesting personal message with historical dimensions. 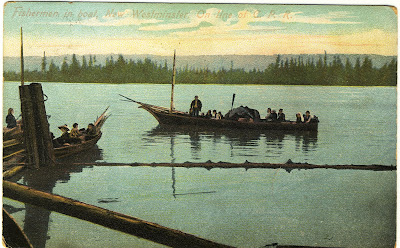 Fishermen in boat, New Westminster, on line of C.P.R. [Canadian Pacific Railway]. Views like this seem to have been very popular in the early twentieth century, combining a glimpse into the modern fishing and canning industry and the 'exotic' - First Nation cannery workers and fishers in their dugouts, working in and around the Fraser River canneries.
Publisher: A.L. Merrill, Toronto. #201336. Divided back; coloured card. Postmarked twice in 1917 at Halifax and Campbelltown in Nova Scotia and at North Vancouver, in British Columbia. 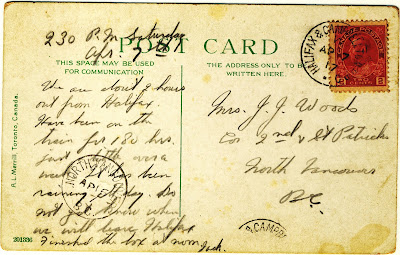 Addressed to: Mrs. J. J. Woods cor 2nd & St Patrick North Vancouver BC.
Back of postcard: 230 P.M. Saturday April 7th
We are about 2 hours out from Halifax. Have been on the train for 180 hrs. just a little over a week. It has been raining all day. Do not yet know when we will leave Halifax. Finished the box at noon. Jack.
John Jex Jr. (Jack) of North Vancouver, British Columbia, born in 1895, was then a soldier on his way to Europe. I can imagine that "the box" he refers to was filled with home cooked and home baked food that his mother had packed with a heavy heart for her son's long journey east.

J.J. Woods had signed up for the Canadian Expeditionary Force in 1916. At the time he was a bank clerk, but after returning from the war, he became a horticulturist on the Agassiz Experimental Farm in British Columbia's Fraser Valley. While working in Agassiz, he researched and wrote a history of the area (History and Development of the Agassiz-Harrison Valley, printed by the Agassiz-Harrison Advance, 1941.)

Soon after in 1941, John Woods was appointed Superintendent of the Experimental Farm at Saanich on Vancouver Island. He retired in the 1960s and died in 1981.

Email ThisBlogThis!Share to TwitterShare to FacebookShare to Pinterest
Labels: Festival of Postcards, Woods North Vancouver BC

You are right....a terrific card. BTW--my grandfather was with the Canadian Expeditionary Force, too.