Could their Hands be Clues? Family Photographs 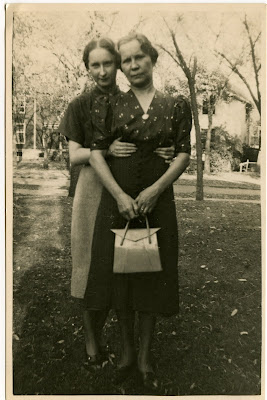 I’m always interested in information about the history of photography and photographers, especially in Canada, and in identifying family photographs.

We often see photographs with someone's hands prominently positioned, particularly in modern wedding photographs, but also in older photos like that above that seem meant to illustrate a close relationship between the subjects. Could these photographs be of help in identifying the same parties in other photographs?

While searching for a newspaper article the other day, I came across an article in the Victoria Colonist from 19091 that caught my eye, titled “The New Test For Criminals”.

According to this, an Italian scientist, Professor Tamassia, had suggested that photographs of the back of the hands of criminals could be substituted for their fingerprints. Photographs were to be taken with the hands hanging down – the veins would then be more obvious. Actual fingerprint patterns might be damaged or even destroyed by criminals with acid or burning, but according to the article, the pattern of the veins on the back of the hands and on the surface of the foot is unique to each individual. Photographs of the feet could even be used to identify individuals who had lost their hands.

A similar article in the New York Times2 gave many more details of the idea, identifying Tamassia as a Professor at the University of Padua and quoting from an article in The Scientific American Supplement. I found a number of newspaper articles about this from the 1910’s to 1914. In the Fort Wayne Sentinel,3 for instance, 4 December 1913, a report from New York says that the Professor had said “the merest novice” could identify differences in vein patterns on the hands, whereas “long training” was needed before fingerprints could be identified. Almost the same information appeared in The Washington Post, 5 December, 1913.4 This article was identified as from a “Special Cable” to the Post from Rome.

The Professor’s system even figures in a mystery story in a book by Arthur Benjamin Reeve, The Poisoned Pen, Chapter XI, “The Invisible Ray” (1912) but was it ever used by any police departments, I wonder?5

I couldn’t help but connect the Professor's 100 year old idea with the biometric identification methods used, and proposed, today – like scanners which match the patterns of veins on an employee’s hands. 6 (His must have been another idea before its time.)

But, of course, being a genealogist, I thought more about the possibility of identifying or confirming information in old family photographs, and then I had to have a look for some family photographs with hands shown fairly clearly, like this one, which so far I'm unable to confirm as James Irwin (born 1821, County Cavan, Ireland; emigrated and lived at Cambray in Victoria County, Ontario, Canada; migrated and died 1910, Neepawa, Manitoba, Canada). 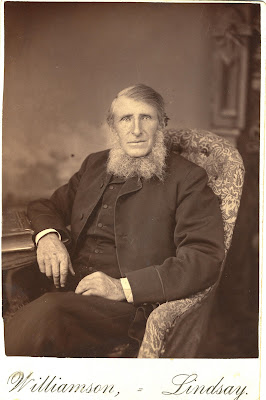 Believed to be James IRWIN of Cambray, Ontario, Canada. Photographer E. (Eli) Williamson, Lindsay, Ontario. From the back of the card - "Photographs and Pictures of all kinds taken in the Latest and Best Style. Prices Low. Satisfaction Guaranteed." Private collection.

Thanks for such an interesting article. We often look at faces in photographs but the hands too might be a clue to a person's identity.

Thanks, Janet, for that information. I have Glen Phillip's 'Western Canada Photographer's List' at home, but not the one for Ontario. I did find Eli Williamson in the census, and his marriage to Mary McFee. I believe I have a few more photographs taken by him.

The idea of looking at hands gives me something more to look for in the family photographs.

Hmm, I have Irwins in my family, in Ontario - Haven't looked at them much, I'll have to look out to see if any names match up here.