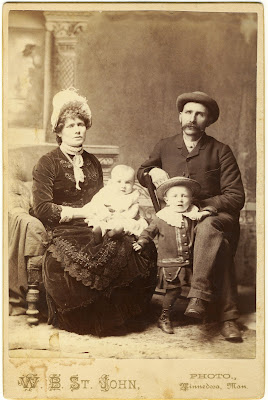 It's time for the 9th Edition of the Canadian Genealogy Carnival.

The theme is: Canadian Fashion Fads.

Here's another of my 'favourite' family photographs. Most people would dress up, if they could, for a family portrait as this family did. The mother's dress is made in a very 'plush' fabric with an apron-like front and ruffled skirt, applied decoration and buttons, and she shows off her lace cuffs and a polka dot collar or tie, and jewellery. I don't believe this style of dress was fashionable that long. The little boy is certainly well outfitted too; his father and the baby look quite plain in comparison.
I hope that this photograph was taken in late fall or winter, as that dress, fancy as it is, looks very warm!

The photographer, W. B. (William Berthour) St. John, was active in Minnedosa, Manitoba, Canada, from 1884, when he opened up a portable photographic gallery, to about 1925. I have copies of other family photographs taken by him. I have only tentatively identified this photograph - but I'm sure it's of an IRWIN family. If you recognize this photograph, please get in touch with me.

May Irwin, an actress, (originally from Whitby in Ontario, Canada) explained to a reporter that she had "received a bushel of letters from people named Irwin who want to claim me as a relative. They tell me that I am the perfect picture of Cousin Betsy or Aunt Mary. The joke of it is that Irwin is only my stage name." (May Irwin, Georgina May Campbell, Wikipedia.)

This week I spoke with someone who thought we might be related through our Irwin lines. If so, we decided it must be a long way back, but never fear - I am happy to hear from possible (and known) IRWIN relatives.