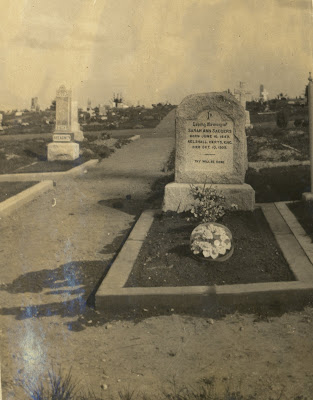 This theme comes from Colleen McHugh, author of the GYR blog, The R.I.P.PERS. and Orations of OMcHodoy.

Colleen asked how families determine their final resting place – “In today's mobile society, does one choose a place near where they last lived? Or do they return to the place of their roots? Do they rest in a family plot? If so, and if married, whose family plot? How has the determination of the final resting place changed between the time of our ancestors and now?”

This seems a very sombre topic for this festive time of year, but, if one was considering some kinds of New Year’s resolutions already, this might be an apt question.

Now I don’t consider that mobility is necessarily more an issue now than in the past. Where I live in British Columbia, Canada, many of us descend from those who left their homes in Europe and Asia, venturing across the seas to settle here. And, even those whose families have been on the land here since time immemorial, often don’t live where their ancestors did, either by choice, by circumstances or, sometimes by government decree.

Burial customs, in some cases, have changed though, and alongside that, our attitudes, both social and personal, about funerals and burial practices have changed. In 1874, for example, the year my great grandparents, Sarah Ann Staines and David Saggers, married, there was great debate in the Church of England, to which they both belonged, and in the English press, about cremation.

The Bishop of Manchester, for example, while feeling “a sort of shudder at the idea of burning the dead” reluctantly admitted that “in a hundred years or so” this “might, perhaps” be the custom. (The Times, Wednesday, 25 March, 1874; page 12). His comments were likely in response to an influential article published in 1874 by the surgeon, Sir Henry Thompson, “The Treatment of the Body After Death”. Thompson was later founder of the Cremation Society of Great Britain. Cremation was not deemed as legal in England till 1884, and not till 1902 was there legislation authorizing it. (See the Cremation Society of Great Britain, History.)

In their late 50s, in 1907, my great grandparents emigrated to Vancouver, British Columbia, Canada from England; neither ever returned there. As far as I know, neither left written instructions about the disposition of their bodies after death, but when Sarah Ann Staines died in 1909 her body was buried in Mountain View Cemetery, then, and now, the only cemetery in the city of Vancouver. In 1935, however, when her husband, David, died, his body was cremated, and, I am sure, his ashes were placed in the grave with Sarah Ann’s bones. He may have requested this, but there may have been other circumstances at the time favouring cremation. [Yes, there is a story here for another time.]

I didn’t realize till I started my family history research that Great Grandpa’s body had been cremated. As a youngster, I did know that my grandparents (his daughter and son in law) were buried, not cremated and that they had not wanted autopsies. They too were buried in Mountain View.

Grandma had come from England in 1907 with her parents; Grandpa was born in Toronto, and was the only one of his siblings to venture from home. He bought the family plots when my Uncle David, their son, died early in life, so I feel they must have decided then to be buried in Mountain View. I never thought it odd that my great grandparents and grandparents were buried here, instead of in England or Toronto. Yes, if grandma had died in England, I’d have thought it right she be buried in Bassingbourn, Cambridgeshire, where she came from, but after all, she died here, her youngest son was buried here, and more importantly, we were here – we were the ones who’d visit –we were the ones who cared the most.

Mountain View Cemetery is even in their Vancouver neighbourhood, and Grandpa had worked at the cemetery, so I’ve never thought he would have wanted to be buried elsewhere. I’m sure my father didn’t think so either. And both my parents are buried there now – or rather – their ashes are. Neither gave me explicit directions about this – except my mother had had my father’s body cremated – and when I asked, she said she wanted no funeral – but just ‘to be with your father’.

However, we did all discuss cremation at various times – it was at one time here a topic of much discussion.

British Columbians were cremated early on, although it was not usual among Christians here. In 1956, though, the Memorial Society of British Columbia was formed in Vancouver. Debate then was more about the high cost of funerals than anything, as I recall, but the question of cremation (and embalming) certainly came up often then. Cremation and the scattering of ashes was sometimes posed as a convenient (and cheaper) alternative to more elaborate means of dealing with bodies.

Over the following decades, interest in cremations has grown in BC. It's estimated that now 70% of bodies here are cremated or more. (For a bit more about this, see a previous post of mine, Boal Chapel Memorial Gardens... March 2009.) With the rise in cremations has come interest in alternative memorials, but in BC, these are often still associated with cemeteries. Some have special columbariums; others allow ashes to be buried or scattered on their grounds, and often offer memorial plaques or the like.

From the 1960s on, I certainly said I’d not want my body buried. I wanted no religious services, I wanted cremation, and over the years, I’ve picked a number of places I’d want my ashes scattered! Odd in a way, as I’ve always been interested in the art and the information found in cemeteries. Like my parents, I was likely thinking about this as quite a practical question.

From the first moments after my mother’s death though, I knew I wanted to bury their ashes in Mountain View. Of course, by the time my mother died, I’d been deep into the family history for over a decade. That undoubtedly had something to do with my decision, but I think it was more emotional than that.

I knew I’d want to visit. Goodness, I visit strangers’ graves regularly, don’t I? Of course, I’d want to visit my parents’. And Mountain View to me is a beautiful cemetery in the most beautiful place I’ve ever seen. And of course, so many other relatives are there as well.

There was one small concern. Would my mother have wanted to be buried with her mother in law? I don’t think she felt they got along that well. Still my mother wasn’t shy – if she hadn't wanted to be there, she’d have told me so, I’m sure.

And I too intend to be buried in Mountain View in the 'family plot' with my grandparents, parents and uncle. I believe I’ve made that plain to the family. Cremation yes, a memorial service – yes, with a piper (or a whole marching band of bagpipers, with drummers too, if I’ve got that kind of money at the end). And, I do hope to have visitors... 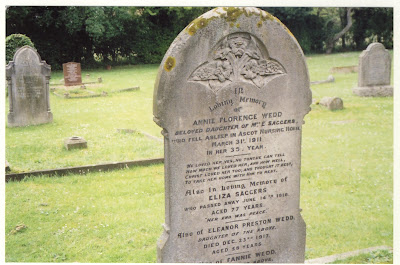 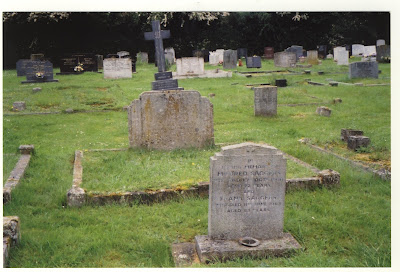 Diane,
really like the stories of your ancestors woven in with good information about traditions of burial and cremation.

Thanks for sharing your story Diane. How long has cremation been dominant in BC?