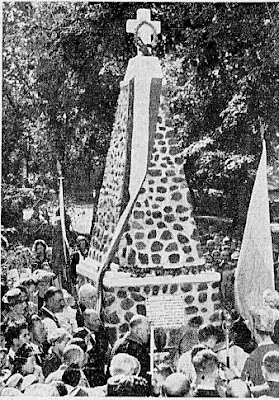 In September of 1943, members of Winnipeg's Ukrainian community celebrated the blessing of a new monument erected on the St. Andrew's Ukrainian Catholic Church grounds.

"For those who were much like you, and, who to build up our Canada, died in the tunels, in the mines, in the forests, in the rocky hills of Ontario, and during their many and varied wanderings in search of work, we pray and bow our heads to them in humble respect..."1

Joseph A. Dyma, of Winnipeg, a pioneer, unveiled the monument which read:

Commemoration of the 50th anniversary of the settlement of Ukrainians in Canada. Wasyl Eleniak and Iwan Pylypiwsky, pioneer settlers, Sept. 7, 1891. Long live Canada. 2

Note: in 1942 a monument to Canada's Ukrainian soldiers had been unveiled on the Church grounds.

1. "Unveil Monument to Ukrainians", Winnipeg Free Press, Manitoba, Canada, 6 September, 1943, page 1, photographs, including one of Joseph A. Dyma. (Spelling of some of the pioneers' names varies from the Tribune article. The Tribune's spelling has been used here.)
2. "Ukrainian Pioneers Mark 50th Anniversary", The Winnipeg Evening Tribune, Manitoba, Canada, 6 September, 1943, page 3. Photograph above.

Thank you for this little bit of Ukranian/West Canadian history.
It's wonderful that people have shown such respect for the contributions made by those who came before.
Bravo to Winnipeggers!
Evelyn in Montreal