I’m not aware of any organized family reunion ever being held by members of my direct families. And nowadays, although there have been a few weddings and one big anniversary party a number of years ago, I’ve been sad to hear it said at several funerals— “This is the only time we get together.” I wonder if that’s often been the case in my family.

Sometimes, of course, it probably just wasn’t possible to ‘reunite’. Many of my relatives lived in straightened circumstances. I don’t think that William ROGERS and Mary Ann WHITE, for instance, living in Toronto, Canada, could have done more than dream of returning to England to see their kin again. (But wouldn’t that have been grand for me – especially if a report in a local newspaper had mentioned a WHITE reunion, which of the relatives had come from 'where' and exactly how they were all related. It does seem to me I often see these notes in newspapers for other people’s families).

I do have a report from a newspaper about one happy occasion when my IRWIN great great grandparents and their children were together again. This is from a newspaper clipping I received from a relative. I have not yet been able to find the article itself in a newspaper to confirm the date and place of publication. I believe this to be from the Canadian Post at Lindsay, Ontario, Canada.

A very happy and pleasing event took place at the new residence of Mr. James Irwin, Neepawa, Man., on Christmas Day. Mr. and Mrs. Irwin were formerly residents of Cambray, Ont., and spent over forty years of their life there. About fourteen years ago the family circle was first broken by two of their children leaving their home for the far west. As years passed on one after another of the family got married and started out in life for themselves, till all but three had left their parental roof and settled down in new homes in Manitoba. Mr. and Mrs. Irwin were anxious to spend their declining years among their children, and having sold their old homestead in the east a year ago last fall, moved to Manitoba (with the rest of the family) in the following spring....
On Christmas day the entire family of nine children gathered together once more around their father’s roof. After doing justice to a good Christmas dinner they presented their parents with two handsome easy chairs...."

The newspaper clipping includes the text of the presentation to the Irwins by their children which says, in part,

Dear Parents,- We, your children, are happy to be permitted to meet once more around the family circle, and to have you in our midst in this the land of our adoption, as you have left your home in the east to live in this country...it is the first time we have all met together for fourteen years...May you long live to enjoy the comfort of ...[the easy chairs] and the company of your children. Wishing you a Merry Christmas and a Happy New Year. Signed,

Now, I’d have thought the family might have had their photograph taken at this long awaited reunion, but if so, there isn’t a copy known to me. However, there is a photograph which I believe would have been taken about 1909 showing all the children, their spouses and Mr. and Mrs. Irwin. See if you notice anything odd about it. 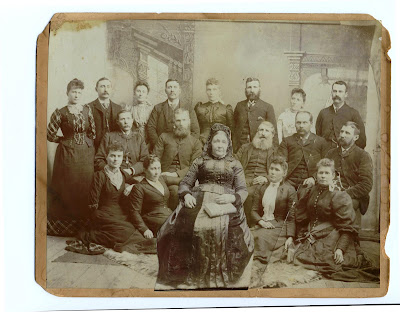 Yes, Mrs. Mary Jane Irwin wasn't really there. I have an ‘original’ copy of this photograph which was given to me by my cousin. We both believe this must have been taken after Mrs. Irwin’s death in April, 1909 as her image has been cut out of another photograph and pasted on. James Irwin died in July 1910 and he does seem to be right in the photo so this was likely taken between April 1909 and July 1910.

The group photograph was taken in a studio and it seems to me that space for mother Mary Jane’s image was deliberately left when arranging family members for the portrait. What do you think?

Was this the only copy or could there be ‘doctored’ copies around that look as if she is alive and in that room with her husband and family? If so, I have never seen one.

This post was written for the Carnival of Genealogy. This time the theme is Reunions! and the Carnival will be posted here at CanadaGenealogy, or, Jane's Your Aunt on 4 September 2009.
Posted by M. Diane Rogers at 7:30 PM