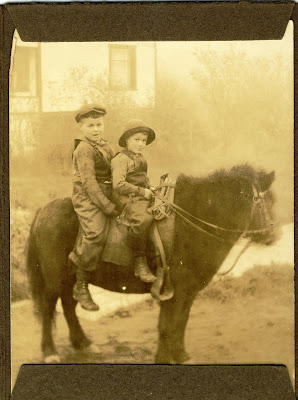 George William and David Joseph ROGERS, c. 1924,
South Vancouver, British Columbia, Canada. Private collection.
The theme for the 78th edition of the Carnival of Genealogy is - Pony Pictures! This will be posted soon at Creative Gene. Don't miss it.


This 'pony picture' is of my dad, George Rogers, and his younger brother, David. David looks a bit doubtful, and the pony isn't interested at all, but Dad looks a bit excited. I believe this photograph was taken near the front of their house on Chester Street, then in South Vancouver. You can see part of a house, and a sidewalk which seems to end right there. The pony is standing on rough, maybe wet, ground.

The photograph is in a nice brown folder, but has no identification on it except for a shield design on the front - shown below. I think the pony must have belonged to a travelling photographer. I'd be very interested to hear if anyone else from Vancouver or South Vancouver has similar photographs. 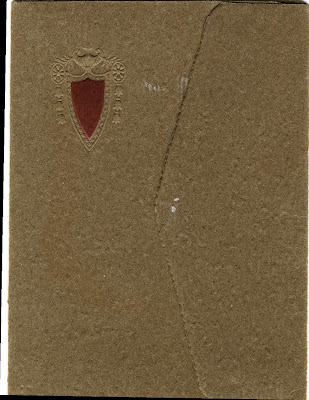 Aren't they cute! Two pony boys. I'm afraid I had to cheat....I couldn't fine one pix of anyone on a real horse!

I love the photo! I bet the pony just wanted the photographer to hurry up so he could go home. Thanks for sharing!