It's time again for Saturday Night Genealogy Fun over at Genea-Musings.
This challenge from Randy Seaver gives me a chance to show off a newly acquired 'family treasure'. Tonight's Fun Genealogy task is to say:

2) Where your ancestral families were living in 1909. Who was in the family at the time? (Randy mentioned using the 1910 USA census. Canada's closest censuses were 1910, and 1906 for the prairie provinces.)

4) Have fun. Learn something!

2.
Both Joe Rodgers and Sarah Saggers, my dad’s parents, were in Vancouver, British Columbia, Canada, having come here from Toronto, Ontario Canada and from Bassingbourn, Cambridgeshire, England respectively. They didn't marry till 1915.

The 1909 Vancouver Henderson’s Directory showed Joe’s residence as North Arm Rd near Bedwell Rd. (Today, North Arm Road is Fraser Street.) His occupation was given as gardener. As far as I know that’s what his occupation was all the rest of his life, although he was apparently very handy with tools (as was his son, my dad) and Grandpa did odd jobs and carpentry for others and for family. Grandpa’s parents had died many years before 1909, as had his grandparents.

The Vancouver Directory for 1909 shows Sarah Saggers’s father, David, living at 601 Pacific in what is now a prime area in downtown Vancouver. Great grandmother Sarah Ann Staines would have been living there too with him, but she died late in 1909 after only two years residence in Canada. Their son Charles is listed in the Directory at the same address, as are five of the six daughters. Great grandpa’s occupation is given as ‘farmer’ which is what he had been in England. (I’m sure he wasn’t a farmer in Vancouver.) Sarah’s brother Charles is listed as a Stanley Park gardener, sister Constance is shown as a maid, Dora and Elsie are listed as dressmakers at Gordon Drysdale Ltd., Florence is a “comp” – compositor – at A.H. Timms and Ethel a nurse at Vancouver General Hospital. (In the 1908 Directory she was shown as living at the Nurses’ Home, although her name was listed with her family at 601 Pacific.) Ethel married William Vere Brandram Webb in Vancouver in December of 1909 so she would have left home then for good. My grandmother Sarah isn’t listed in the 1909 Directory. I think it likely she was living with her family then, but not working outside the home. In the 1911 census though she was shown as ‘living-in’ as a maid, so it is possible she was living elsewhere in 1909, as I believe her brother Bert must have been, as he isn’t listed with his parents either.

On my mother’s side, I know her parents, James Walter Scott and Amy Estella Irwin, were living in the town of Newdale, Manitoba, Canada.

My maternal grandparents didn’t marry till 1910. Grandpa Walter was working as a store clerk in Newdale in 1909 still, I think, and was most likely boarding with a family then. I do not know for sure.

His mother, Mary Janet Wood, widowed in 1892, was living in Nottawa, Ontario on the farm which had been her father’s, with, I believe, her other children, Harriott, Anne and Sam. Their grandfather, Samuel Wood, had died in 1908, just the year before. Mary Menzies who had lived with the family had married in 1908 so she would have been living with her husband in 1909, but she was still in Nottawa.

Both Amy’s parents, William Irwin and Janet Carmichael, were living in Newdale - on Church Street. William had a machine shop and a lumber business, as well as a farm, but I believe he sold the lumber yard in or around 1908.

Janet’s parents were long dead, but William’s parents were retired and had been living in Neepawa, Manitoba not too far from Newdale. Mary Jane Moffatt, William's mother, died in April of 1909 and William and Janet along with all William’s brothers and sisters gathered at Neepawa when Mary Jane died. (James Irwin, William's father died in 1910.)

My grandmother did tell me she worked away as a teacher before her marriage; I believe in 1908-1909. (I hope to confirm the dates someday soon.) If she was in Newdale in 1909, though, I’m sure she’d have been living with her parents and her sisters Maggie and Minnie. Brother Charles married in 1908 and I'm sure he was running the Irwin family homestead by 1909. How do I know that?

Well, last Sunday I spent much of the day at the Vancouver Postcard Show. This is BC's biggest postcard show and there are boxes and boxes of postcards to see, as well as collections of other ephemera and displays too. I was looking for British Columbia cards to add to my collection and I certainly wasn't disappointed.

Before I left though, I thought I'd have a look through some other Canadian cards from an out of town dealer.

To my surprise, there were several postcards from Newdale, Manitoba, two of them written by my grandmother's sister in law. The card below is one of those. It's postmarked 1908 and in the message, Etta (Campbell) Irwin (Charles Irwin's wife) writes about how busy they've been with the threshers in for 4 1/2 days. She mentions she's marked the front of the card to show "Charles fathers house" next door to the manse and the Presbyterian Church - this is William Irwin and Janet Carmichael's house. My grandparents and mum later lived next door to it.

I do have another good photograph of the house, but this postcard is now extra special. If there is a moral to this little story, it's to check every box! and to keep all your surnames and place names in mind, no matter where you are. 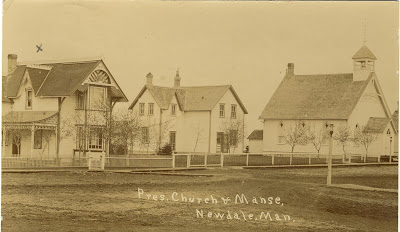