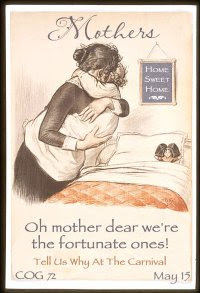 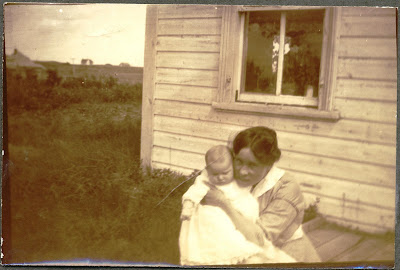 Mothers' Day in May 1914 in Manitoba seems to have been an occasion for reflection and remembrance.

Yesterday was a double decoration day. Soldiers heaped flowers at the graves of comrades who had fought the good fight even to the death, for their country and thousands wore a fragrant little flower over their heart to do honor for soldiers of a far different stamp, soldiers who have struggled or are still struggling not to take life, but to give and guard it. That flower seemed to cast on the crowd, something of the brightness and tenderness it commemorated, and on the wearer a sort of exultation as though in remembering his mother he remembered the best in himself.

The observance of Mothers' Day was not left exclusively to the sons, not by any means. Many daughters of all ages, some now mothers themselves, wore the little emblem as proudly as their brothers.

Lest they forget, these busy grown up sons and daughters, members of the Mothers' association were stationed Saturday at 14 strategic points throughout the city, with 6,000 carnations, which were quickly bought up by the passersby. Passengers getting off their trains at either station, matinee crowds at five of the theatres, afternoon tea drinkers at the Royal Alexandra hotel and Fort Garry hotel were reminded by the flower venders that Sunday was to be dedicated to the little mother heroes as well as the big stalwart military heroes. The receipts from the flowers were something over $700, of which the $300 or so profits will go to the Day Nursery which helps so many of these brave little women to keep their small families together.

The ministers were also asked to observe Mothers' Day at one service at least. This was done at nearly all of the churches by sermons, music and flowers. And the worship was none the less reverent or uplifting for that observance. [ p.9 ]

A special service was held at Grace Church in the morning... Rev. J. E. Hugheson, B.A., spoke on the subject of "Mother," and addressed what he had to say largely to the young men away from home. "Write Home" was his message, and "do not let mother fret because she knows not what you are doing." In the address to the children, Mr Hughson told stories emphasizing the importance of respect and reverence to mother. [p. 22]


Within a short period afterwards, Canada would suffer two disasters - on May 29 the Ocean liner RMS Empress of Ireland sank in the Gulf of St. Lawrence and over 1000 lost their lives; in June, an explosion at a coal mine in Hillcrest, Alberta killed 189 men; and then in August, alongside Great Britain, Canada would be at war.

This post was written for Mothers! - the 72nd Edition of the Carnival of Genealogy. Watch for the full Carnival lineup to be posted at Creative Gene on May 15th, 2009. You can still participate - the deadline is May 15th. Look for submission guidelines on Facebook at the Genea-Bloggers Group or go to Blog Carnival for information.

I was struck by how much your photo resembled the mother and baby in the poster.

Hi Diane,
Your post was a very special one - reminding us of all the sacrifices made by mothers of sons and daughters in the service of their homeland. Thank you for sharing this.