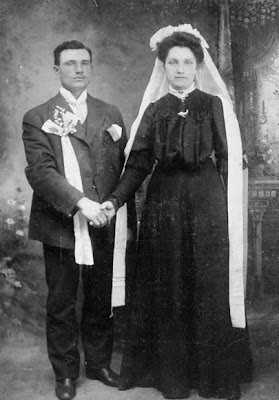 Credit: Schaffer, Jacob / Library and Archives Canada / C-014489
Location unknown. Private source. No restrictions on use. Copyright expired.
I am still learning about research on Central and Eastern European genealogy for my Canadian family connections and since this edition of the Carnival of Central and Eastern European Genealogy is a 'carnival', I thought I'd blog about a couple of sources I've been looking at.
Both are available through Statistics Canada's website, which is not a government department that most might think to look to first for genealogy information. Statistics Canada is responsible for Canada's national censuses - a central source for 1850-1911 Canadian genealogical research - but the historical censuses have to be transferred to Library and Archives Canada before they are made available to researchers.
Canada Year Book Collection
Censuses were never meant primarily for genealogy, however much we might wish it had been so. Information gathered from each census is intended usually for government, or nowadays, perhaps for certain commercial uses. From each census, statistics are compiled on various topics. Much of this data is now very useful to historical and genealogical researchers. Recently, Statistics Canada put on-line free its Canada Year Book Collection, covering 100 years from Canada's confederation in 1867 to 1967.
I have been 'collecting' some information from these on immigration to the province of Manitoba, Canada where my mother was born. Just as an example, this is from the 1907 Canada Year Book.
Population – Manitoba

Population By birthplace (my selections)

Statistics by province are also given by race or origin and by religion. Always check the notes - under religion in 1891, for instance, Manitoba Mennonites are 'lumped in' with Baptists.
1907 Canada Yearbook, p. 5, Table 1
Canada Year Book Collection, Statistics Canada (1867 to 1967):
http://www65.statcan.gc.ca/acyb_r000-eng.htm

The Canadian 1940 National Registration process included anyone in Canada from 1940-1946 who was 16 years of age or older, unless in the armed forces, religious orders, or confined to an institution. These records are still in the care of Statistics Canada; some of the records for those who died during that period were destroyed.

These records may include the place and country of birth of individual and his or her parents,the individual's nationality, their year of entry into Canada, if an immigrant, their racial origin, and their languages. All very important information for genealogists.

Although there is a “soundex-format index”, to request a record you must supply the full name, place of residence in 1940, and some identifying details, such as country of birth, date of birth, approximate age and occupation - as well as proof of death at least 20 years ago, in most cases. Requesting a 1950 National Registration record is not free for genealogical/historical requests, the charge is $47.25 Canadian for each search. This is refunded for unsuccessful searches.

Genealogists and historians are asking to have these 1940 National Registration records transferred to Library and Archives Canada. I will keep you posted on this.

During Scanfest today, genealogical conferences were one of the topics discussed. I always look forward to going to a 'big' conference and know there are at least two coming up in North America this year. I thought I'd post the links here too. I'll be attending the AHSGR conference in Medicine Hat, as that's the closest to me this year.


Joint Conference - the Society for German Genealogy in Eastern Europe and the Federation of East European Family History Societies: http://www.sggee.org/conventions/ConventionNews.html

***********
Note 1 - This photograph is not related to my family (as far as I know). For a thoughful comment on the LAC caption for this photograph, see Framing Canada: A Photographic Memory, The Canadian Mosaic: http://www.collectionscanada.gc.ca/framingcanada/026020-3527-e.html
Posted by M. Diane Rogers at 11:16 PM