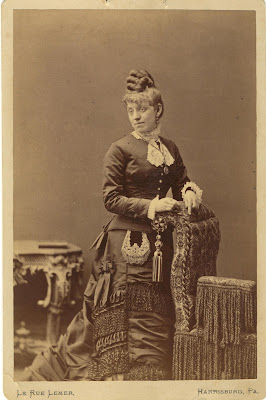 I love this unknown woman's image and show it in my photograph workshops sometimes. It is a 'stray' that I bought in New Westminster, British Columbia, Canada.

I think the photographer must have been pleased with the way the photograph points up the various textures in her costume and her hair. She is showing off her ring finger, so I thought this must have been an engagement photograph, but she does seem sad to me. Perhaps she meant to look wistful. But what I specially like is that her dress is even more 'upholstered' and 'decorated' than the chair she rests her hands on. I do hope it wasn't hot that day.

This photograph is my entry for the 10th Edition of Smile For The Camera. The theme this time is Costume - as in dress in general; especially the distinctive style of dress of a people, class, or period. Show us that picture that you found with your family collection or purchased that shows the costumes of the rich to the not so rich, from the civil war to the psychedelic sixties. I know you have them, so share.

Smile for the Camera, Shades of the Departed: http://www.shadesofthedeparted.com/

I love this photo! I love the detail in her dress and how lovely the whole thing is. What a "PRICELESS" treasure. I can't imagine anyone loosing it or selling it. Thank you for sharing and I'm enjoying your blog. Maybe with your information and hopefully a class or two, I can locate my Candian Ancestors. I have a group that migrated from Greece to Canada and then later to the states. Im stuck in port in Canada right now. Hope to get information soon so I can set sail on another voyage.

Hi Diane,
Love this picture, too! Do I see 3 rings on her fingers? Wonder if the dress was hers or the photographers? The long fringe seems to match so perfectly!

With rings on her fingers and bells on her toes, she shall have music wherever she goes ... :-)

Thank you for this great photo, Kay. Regards, Brett