This post is for the 3rd Edition of the Canadian Genealogy Carnival, 'Around the Kitchen Table'. Does your family have a favourite Canadian recipe? Or perhaps you have the recipe to your Canadian ancestor's favourite dish. Maybe you just like Canadian Maple syrup. Share with us your favourite Canadian recipe and/or food.
I do have copies of a few recipes from both my grandmothers. My English grandma, Sarah Frances (SAGGERS) ROGERS, had a recipe for Dandelion Wine, for instance, which she could make in Vancouver, British Columbia, Canada as easily as in Cambridgeshire and Hertfordshire in England.

The most familiar of my family’s recipes, learned from my Na, my maternal grandmother, were, I suspect, highly influenced, first by the practicalities of living on the Canadian prairies and later by wartime shortages in the 1940s and later still, convenience, as my Na always had a busy social life and my parents both worked in our business. My mother relied quite a bit on commercially packed tins – soups, corn, even tinned beef and local salmon. Most meals at home were pretty plain - ‘English’ cooking. We didn’t have meat and potatoes every night, but close to it. Good local vegetables were available (but boiled to death) and we ate or cooked whatever fruit was in season and reasonably priced. In our own yard was a cherry tree, a (not so good) apple tree and we had rhubarb which I always liked stewed or baked in a brown betty. We ate lots of jam tarts which were easy (and cheap) but never any maple syrup. (That's an Eastern thing!)
I remember my Na’s bread, buns, cakes and cookies best. If friends were expected or if there was a bake sale coming up, she’d be ready. One special family thing about her baking was her use of butter. On the farm or in Newdale, Manitoba where she and my mum grew up, I don’t think eggs, butter or milk were ever in short supply. Butter wasn’t always available in other areas though and of course it was sometimes expensive to buy. I noticed a Vancouver woman’s recipe for ‘Wartime Butter’ in one of my World War II era cookbooks.

- Mrs J. A. McDonald,Vancouver p.15, Navy League Chapter I.O.D.E. (International Order of Daughters of the Empire) Victory Cook Book, October 1941, Victoria, BC, Canada.
In Canada, despite a temporary lifting of legislation in the early 1920s, margarine wasn’t legal till 1949 in order to protect the dairy industry’s markets, but even after 1949 each province could regulate its sale. (See Note 1.) Earlier, even the thought of allowing butter imports from abroad had been contentious. Newfoundlanders bootlegged margarine to Canadians from the 1920s, but the 1948/1949 pro-margarine rulings meant Newfoundland’s margarine was legal when that former British Dominion joined Canada in 1949. Don’t you love Canadian politics?

For years in British Columbia, margarine was allowed for sale only if it didn’t ‘look like butter’. (A package of dye was sold with it for mixing at home.) My dad was mad at the dairy industry lobbyists about all this till the day he died. We never had butter at home, only margarine. 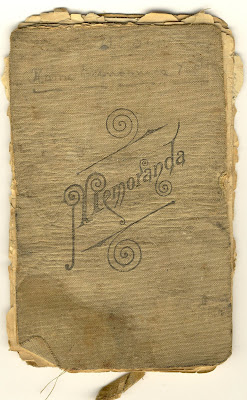 Na didn’t live with us, but she was close by and sometimes looked after my brother and me after school. She often brought a little something with her.
Below is her Coffee Cake recipe from a very tattered and broken 'Memoranda' of hand written recipes. On the cover writing can be seen, “Home Economics”, and inside is written “Amy Scott” so it dates from after 1910 when she married and began using SCOTT instead of IRWIN as her surname. This recipe seems to have been re-written. Perhaps she noticed the pencil fading and wrote it again some time later. 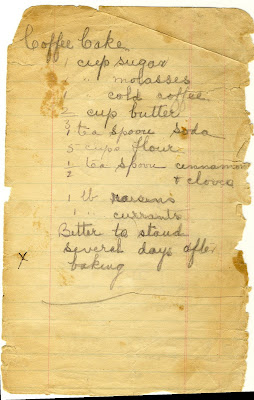 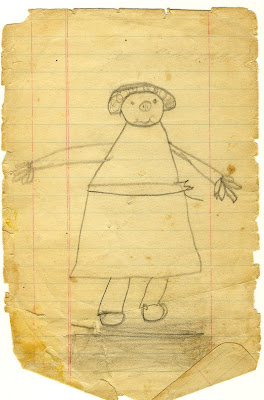 I don’t remember Na consulting a recipe very often, so I suspect she kept this little book through all the moves only because of the ‘colouring’ Mum did on some pages. Is this a drawing of Na, I wonder? Is that a big skirt apron she has on with waist ties? Not too flattering a picture (my Na was petite) but quite a keepsake.
(My mum apparently coloured on a lot of things; I was NEVER, EVER allowed to do that. And, neither were my children.)

The Navy League Chapter of the I.O.D.E. was organized at Victoria, British Columbia, Canada in 1912, according to the information in my cookbook.
IODE in BC – BC Women Helping BC: http://iodeinbc.ca/

“Newfoundland Granted Autonomy on Fish Exports and Margarine” Winnipeg Free Press, Friday, 10 December, 1948, p.10. (Newfoundland would have been able to produce and sell margarine, but not to export it to the rest of Canada.)

Thanks for sharing the Coffee Cake recipe, I think it's important that the recipes used by our ancestors are kept alive! I found the margerine article interesting, I didn't realise that margarine was banned and unavailable here in the UK until I read an article about it last week!
Thanks again,
Colin

Greetings Diane,
Thanks for participating in the Canadian Genealogy Carnival. I remember when margarine didn't look like butter - yuck! The Canadian dairy farmers like me, as we eat butter at our house. Thanks for sharing the recipes and the drawing from your Na's book.
Kathryn

Yes, I eat butter at home too! I said I would when I was a kid so being as stubborn a person as my Daddy, I do.

Your post gave me a lot of "food for thought"(smile).
First off, I loved reading about margarine because (as mentioned in your reference) here in Quebec the margarine colouring laws have just been repealed - and in even now there was some resistance from the dairy farmers.
Secondly I would like to say that your style of writing about food and food history is very inspiring.
your blog is teaching me a lot about how to blog about social history.
Thanks you,
Evelyn in Montreal