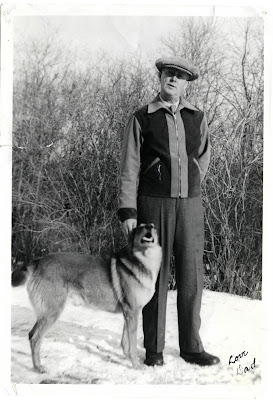 It's time for the Carnival of Genealogy's 64th Edition - 'Walking In A Winter Wonderland'.


Not All Misery During Canadian Winter

....Canada as a matter of fact has one of the healthiest climates in the world – our winters and all.... A good many Canadians do not realize this. They have got into the bad habit of blaming the climate unduly and thus disparaging the country. If they lived more in the out-of-doors and enjoyed and made use of the bracing winter weather, they might get over the illusion that this is a terrible country to live in. The greater part of our winter should be a joy to every normally healthy inhabitant of the country.


My mother grew up in Manitoba, Canada and always thought we wet coasters in south western British Columbia didn't even know what winter was. I never heard her or my Na complain about winter, except maybe about the slush and wet we kids tracked in on their clean floors.

This photo, signed 'Love Dad', shows my maternal grandfather, James Walter Scott (1885-1947) on the farm in winter at Newdale, Manitoba, Canada with the family's dog, Sandy.

I don't know what date this is, but it was probably in the 1930's as my mum was working in Winnipeg by then, and I imagine the photo was taken to send to her in the city. (She was an only child.) Likely my Na - my maternal grandmother, Amy Estella (Irwin) Scott (1884-1983) - took the picture.

I'd guess it's early in the winter as there's snow on the ground but Grandpa's not 'bundled up' yet. My mum told me once he always wore a hat. This one sure wouldn't keep his ears warm.

I never met Grandpa Scott, but I feel from what my mum and grandma told me of him that we'd have liked each other. My mother used to talk a lot about Sandy, the dog, a lot too. I remember she told me he was afraid of thunder storms and used to hide under the bed. Probably he liked winter as less chance of thunder then, I think.
Posted by M. Diane Rogers at 10:09 PM

And what great weather for a great-looking dog! I remember how much my Golden Retriever loved to roll around in the mounds of snow and then shake it off - he looked like a snow cloud!
Evelyn in Montreal
A Canadian Family

He was very smartly dressed for the picture. My husband wears a hat like that - it has ear flaps tucked inside that he only uses on the coldest days.

Aha! ear flaps - and probably gloves in a pocket. He was likely more prepared than he might look.

What a wonderful story and a great picture, thanks for sharing!

that is a nice man and dog picture!