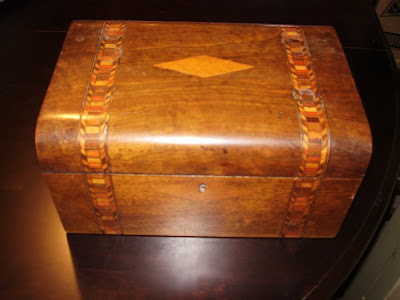 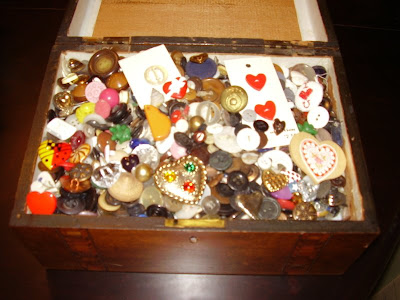 "Our Curiosity Cabinet is a marvelous melange"

Well, this time round I pulled an old wooden box out of the Curiosity Cabinet - its contents are indeed a melange, a variety, an assortment of miscellaneous things - buttons!
This is my grandma Rogers' button box, full of years of our family life - Grandpa's and Dad's shirt buttons, big fancy buttons from the colourful dresses my mum liked to wear, the odd earring or part of a broach (might come in handy someday, you know), a hot pink button from one of my favourite teenage coats, even some Canadian Army buttons - buttons nowadays are so plain in comparison.
I never really knew my grandma Rogers, but when I was little, while mum sewed, I used to play at sorting buttons from the box by colour and size or just by picking out the ones I liked. Later on I made little decorative pins with buttons, nowadays sometimes I scrapbook with buttons. (You're right - it's seldom anymore that I actually sew on a button!) I always think of this as 'her' box although it's been used by mum and me since 1954. 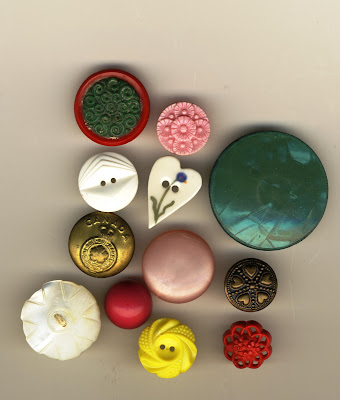 I do collect one kind of buttons now myself - heart shaped buttons. You can see a few here. I can't seem to let go of the others though - surely they'd be useful to someone, but there are a lot of memories in that box.

I'm not alone in collecting buttons.

Here is Paul Rice's amazing website full of his grandmother, Anna Claudia Cope's, buttons: http://www.pdrice.com/
The Keep Homestead Museum in Monson, MA, USA has Myra Keep Lovell Moulton's button collection. Photos: http://www.keephomesteadmuseum.org
An article about the Warther Carvings Museum and Button Collection in Dover, OH, USA - 73,282 buttons on display. Roadside America.com: http://www.roadsideamerica.com/story/10049
Have a look at the links to learn something more about buttons and those who collect them.

I searched through my Sweetie's button boxes (yes, there are several more than one) looking for a set of buttons for a sport coat last week to no avail. Ended up at the store buying metal buttons and suffered sticker shock when I got to the cash register. But I had fun looking through thousands of buttons handed down through at least three generations of my wife's family --- it is a growing collection!

Thanks for sharing your buttons --- heart-shaped ones are unusual and I'm sure a joy to you to collect.

Hi there, I found your site through the cabinet of curiosities post -- and I wanted to say hello, because I. too have a box of buttons from my Grandma. I have some of the very same ones as in your photo -- the pink floral one, I've got in red.

Grandma lived in Montreal for many, many years, and then Victoria. Now, her buttons are loved and pored over and sorted by me here in Melbourne, Australia.

It's a small world.