KLUCAS UPDATE - Smile for the Camera

This set of stray photographs is now up at Flickr: http://www.flickr.com/photos/mdianerogers

A number of these photos are from Minnie KLUCAS. The photo above identifies her with Alfred and Richard Klucas. Might this be Wilhelmine Sarah STREICH, née, KLUCAS, who grew up in Minnesota?
I found an obituary for Minnie Streich from the Herald-Journal of Winsted, Minnesota, U.S.A. She had 2 brothers, Alfred(wife, Freda) Klucas and Richard 'Dick' (wife Ollie) Klucas. Their parents were Frank Klucas and Louisa Kretz: http://www.herald-journal.com/obits/2002/streich0402.html
No mention there of Canadian connections, but a Rootsweb search turned up a connection quickly. Look for both KLASEUS and KLASGES in the history Footprints of time : Viscount and district, 1905-1985 on-line at Our Roots: www.ourroots.ca
If this is the right family, Minnie would have TREICHLER relatives in Arizona and elsewhere. I will try to contact someone who may know more.
Another photo in this group of strays was sent to Mr. Arthur ANDERSIN Viscount Sask Canada from his cousin Margaret Anderson of Hillsboro [Kansas, U.S.A.?] 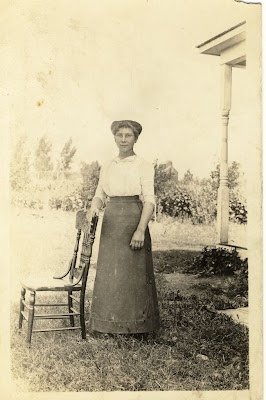