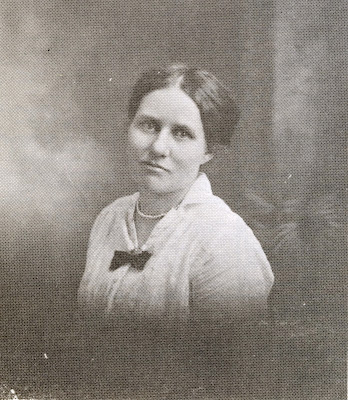 Isabelle MCTAVISH,
b. 19 December, 1881 Minnedosa, Manitoba, Canada;
d. 26 January, 1953, Winnipeg, Manitoba, Canada.
This post is for the Second Edition of the Canadian Genealogy Carnival - "My Famous Canadian Ancestor".
Was your ancestor a famous Canadian hockey player, actor or politician? Tell us about famous Canadians in your family. Don't have a famous Canadian ancestor in your family tree? Not to worry; choose a famous Canadian you admire and share why you would like to have this person as your ancestor.
I have NO famous ancestors at all, and no famous connections either (unless we count the old story about being related to Mary, Queen of Scots, and I don't!), but there are a number of family connections to Canadians who should at least be better known, in my opinion.
One of those is Isabelle McTavish, a Canadian medical missionary to China. I heard about her when I was young, since she lived in Newdale, Manitoba, where my grandmother and mum were both born. I was always interested in her since I was told she became a doctor in the 1910's, which was certainly uncommon at the time, spent much of her life in China, and never married.
Isabelle MCTAVISH, b. 19 December, 1881, Minnedosa area, Manitoba, Canada; d. 26 January, 1953, Winnipeg, Manitoba.

Although Isabelle McTavish was born near Minnedosa, Manitoba, Canada in 1881, sometime before 1891, her family moved to Newdale, Manitoba. Her father, a farmer and entrepreneur, taught school at Newdale, but died at work in 1891.
Life must have been difficult for the family. But in 1915, Isabelle Mctavish was graduated as a doctor from the Manitoba Medical College in Winnipeg. Canada. She and Frances Gertrude McGill, also from Minnedosa area, that year were the third and fourth women to be so graduated, following Dr. Edith Ross in 1913 and Dr. Lavinia McPhee Green, the very first to be graduated. Dr. Green hosted a dinner at Winnipeg's Royal Alexandra Hotel for the four female doctors the evening after the graduation. (Manitoba Free Press, 15 May, 1915, p. 9)

That fall, Isabelle McTavish left for China to work as a medical missionary with the Presbyterian Church of Canada. Until 1942, with brief periods away, she continued to work as a doctor in China – in North Honan, at Wuan, Wheihwei, and at Changte (at first with Doctor Jean Gow). According to McTavish's obituary, the Chinese government honoured her for this. (Winnipeg Free Press, 26 January, 1953, p.9.) The Newdale 1870-1970 history mentions that this honour was the ‘Order of Mercy Decoration Medal, 2nd Degree’. (Printed at Brandon: Newdale Historical Society, 1970, pp. 146-7)

McTavish apparently returned home in 1927 during the period of civil war. My mother remembered her speaking in Newdale to raise money for missionary work. (I'm sure this is how my mother first realized how wide the world was outside Newdale. My mum was fascinated with China all her life. I'm glad she did get to travel there at last.)
McTavish didn’t practice locally as a doctor as far as I know, but my mother said she did attend my great grandmother when she was dying at home, as the Newdale doctor was out of town.
McTavish returned to China in 1931. During World War II, she and others were taken prisoner and interned; she was freed and returned home in 1942 with other missionaries. The Lethbridge Herald of 25 June, 1942, p.9, reported her among those who had left Shanghai on a repatriation ship for Portuguese West Africa.

From 1942 to 1946, she served at the Bonnyville General Hospital in Alberta, Canada (Katherine K. Prettie Hospital), long a project of the Women’s Missionary Society of the Presbyterian Church of Canada and later of the United Church of Canada. In 1946, she returned to China to help re-open the hospital at Changte. She left China for the last time in 1949 and returned to Newdale, Manitoba, but very soon moved to Winnipeg. She continued to speak, usually to women’s groups, on missionary and medical work in China, and attended conferences, for instance, a Methodist Missionary conference in New York in 1943.

On the 26th of January, 1953, she died in Winnipeg, Manitoba. She was buried in Newdale in the McTavish family plot. (North side, Newdale’s ‘Oldale’ Cemetery.) Both her brothers and her sister survived her.

Recently there has been more interest in the work of Canadian women and others in medical missions in China, see for example, Healing Henan: Canadian Nurses at the North China Mission, 1888-1947 by Sonya Grypma (Vancouver: UBC Press, 2008) and In War and Famine: Missionaries in China's Honan Province in the 1940s by Erleen Christensen (Montreal, Kingston: McGill-Queen’s University Press, 2005).

So far, there are only brief mentions of Doctor Isabelle McTavish though. I hope in 2009-2010 to write a research piece about her myself.

I'd be interested in learning more about the other women connected with Isabelle McTavish's life, particularly Dr. Lavinia McPhee Green, who I believe has a British Columbian connection.

Greetings Diane,
I learned something new today, as I had not heard of Isabelle McTavish before reading your post. Thanks for participating in the CGC.
Kathryn

Diane,
I love to read stories like this about amazing women who came before us. Thank you for sharing Isabelle's story with us. Good luck with your search for her colleagues.

Isabelle McTavish was my Grandmother's cousin and a much-loved member of our family. I have a souvenir or hers that she brought to us from China.

Dr. McTavish is still remembered in China. I found a text from Anyang Government's website about the history of the hospital she served. A large part is devoted to Dr. McTavish's touching story, told by a retired staff, Mr. Li Wenren. I believe Dr. McTavish and her colleagues are as great and as the famous Dr. Norman Bethune.

Dr Isabelle McTavish was my Grandmother's sister My Grandmother was Annie McTavish. My father Her son was John R Waddell

Isabelle McTavish's siblings: John Fraser, James Andrew, Annie (married Thomas Andrew WADDELL).
Thank you for the information there was much that I didn't Know.

Diane, My name is David Nicholl and a member of the McTavish Clan in Manitoba. I was only 7 years old when I met her for the first time at the Mctavish Reunion at Clear Lake in 1951. She was directing the various family members to the long picnic tables in the proper clan order of importance. She was an outstanding figure and her knowledge of the "Old" McTavish Clan from Scotland which she talked about at the McTavish Reunion influenced me to research and record the history of the McTavish Clan. Thank you Isabelle McTavish.

It is great to know more of a Great Aunt that I heard about as I grew up. She gave my Dad (Boyd Waddell) his first Pen and Pencil set when he was a boy, it has been passed onto me and it will be passed onto my son (Ryan Waddell) who currently lives in Taiwan. Ryan has wanted information on what part of China she worked as a missionary as he intends on traveling to that part of China. Thanks for the research you have provided.
Dwayne Waddell

Re: Dr. Isabelle McTavish
I grew up learning about my Aunt Belle and her life in China. It was always great excitement when she returned every 7 years on furlough. My Mom Annie McTavish Waddell would be thrilled to see her beloved sister again. I remember stories of her being held by the Japanese who made her kneel and ordered her to "now pray to your God and see how much he helps". I am sure she did. Later one of their own became ill and they were apparently glad of her help.
Dr. McTavish originally wanted to go to India but the Mission society decided her health would suffer there, so they chose China for her. Imagaine learning to speak and write the language.
I'd be interested to hear what Diane Rodger's Grandmother's name was.
Posted by Mae Sewart (Waddell)

My Great Grandfather, Alexander Edgar Green was married to Dr. Lavinia McPhee Green (mentioned in your article) from 1907 to 1922. I have been trying to find out more about Lavinia and keep hitting dead ends. She had been best friends with our great grandmother, Mr. Green's first wife prior to her death, then married Mr. Green and was well loved by her step children and we don't know what became of her.

It is great to havin information on Dr. McTavish. I came across her name in "the indomitable Lady doctors" by Carlotta Hacker (1974) I will be using your information to create a mini bio for the web site Famous Canadian Women. Http://famouscanadianwomen.com

I also am pleased to read this article on my great aunt, Dr. Isabelle McTavish. I also see that my brother, Dwayne Waddell, posted a comment on this article years ago (above) as he passed away in 2015. Dr. McTavish was my Dad's (Boyd Waddell's) aunt. When I was 10, my grandfather, Thomas Andrew Waddell (Dr.McTavish's brother), gave me a shoebox full of Dr. McTavish's letters from China because I told him I was interested in stamp collecting. Grandpa also used to talk to me about the family geneaology I became interested in stamp collecting as a result and it became a lifetime hobby. Unfortunately, I was interested in only the stamps at the time & I didn't keep the letters, I just wanted the stamps at the time, but now I realize that the lifetime descriptions in her letters would have been interesting reading. I do have 2 with the letters, and I treasure these because they were from my great aunt to her sister, Annie Waddell. Thank you again for this info which I'll use in my other hobby, geneaology, also as result of my many days with my dear grandpa & grandma. Thank You, Jim Waddell