Buda Brown - Women and the Vote in British Columbia, 1956 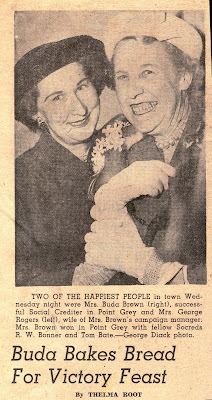 An e-mail pointing out that women should make sure they vote, considering how long it took for Canadian and U.S. women to get that right, is making the rounds. In fact, the first women in Canada to vote federally did so under the 1917 Military Voters Act which allowed British subjects with close male relatives in the military to vote on those relatives’ behalf.

Manitoba granted women the right to vote provincially in 1916, as did Saskatchewan, then Alberta. British Columbia followed in 1917 and women were granted the federal franchise in 1918. Not all women were included, though, as many women and men continued to be denied the right to vote, if classed as Chinese or Indian, for example.

One of the things I’ve pulled out of my ‘Treasure Chest’ lately is this newspaper clipping from 1956 from the ‘women’s pages’ which headlines a victorious candidate in the British Columbia election that year, Buda Brown, and her bread making skills.

“It was the same old thing Wednesday [election day] at the Point Grey home of Mr. and Mrs. Don Brown.
Buda was baking bread.”

I know she and I would have had to ‘agree to disagree’ on many issues, but at the time of her election as a Member of the British Columbia legislature (M.L.A.) Buda Hosmer (Jenkins) Brown, then in her sixties, was already well known as a hard-working politician in her own right, having served for years on the Vancouver Parks Board, a sometimes contentious arena.

She is quoted in the article as saying that her husband (who had been an M.L.A. himself previously) was “as pleased as I am, so there won’t be any fuss about me being away from home” but that she would continue to be most concerned with “the welfare of the children of the community”.

Only 2 women succeeded in this 1956 provincial election, Brown in Vancouver for the Social Credit party, and Lois Haggen for the CCF – Cooperative Commonwealth Federation - in Grand Forks. Others had been in the race – Evelyn Fingarson (Social Credit), and Emma Tinsman (Conservative), Grace MacInnis (C.C.F.), running against Buda Brown, and Nellie McCay (Liberal) all in Vancouver, and Lydia Arsens (Social Credit) in Victoria.

In an odd twist, Brown apparently blamed this on women voters, saying - "Women are always screaming the we should have more women in the government, but it appears that when they go to the polls, they forget their own screams and vote against the women candidates." Her view is often echoed even in today's examinations of women's political work after suffrage.


Buda Brown continued as an M.L.A., becoming British Columbia’s second woman cabinet minister in 1960. Sadly, in 1962, she became the first woman sitting M.L.A. in British Columbia to die in office.

“Voting in Canada, How a Privilege Became a Right”, CBC: http://archives.cbc.ca/politics/elections/topics/1450
Posted by M. Diane Rogers at 7:26 AM