Why Do You Say That, Grandma D, or, The Family Language - Carnival of Genealogy - 54th Edition 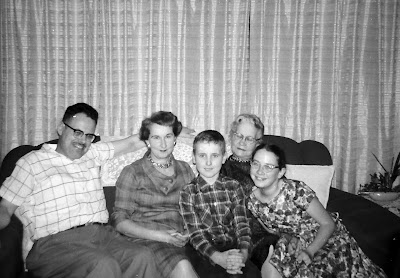 The ROGERS-SCOTT family, at home in Vancouver, British Columbia, Canada c. 1958. (I say that because Dad has a moustache here - he grew that for B.C.'s Centennial in 1958.)


'The Family Language' is the topic for this 54th Edition of the Carnival of Genealogy. Does your family use words and phrases that no one else knows or understands?

I think now that most of the odd words or expressions we used at home when I was young were simply ‘old fashioned’ even then. Someone might have a ‘tin ear’ – to be unable to hear much difference between musical notes – or be putting down a ‘red herring, or printing up a lot of ‘bumpf’ to annoy the taxpayers. But, some were quite modern, like ‘gobbledeygook’ and ‘bafflegab’. (You can probably tell there was both music and politics in our home.)

I don’t remember many words or phrases that Mum and Na (grandma) used that I’d associate with the Canadian prairies where they both grew up. We did know what the ‘back forty’ was though, sort of, and there was ‘till the cows come home’ and the best remembered phrase of my Na’s, to have done so many (substitute the number) ‘things before breakfast’. Once Mum had to explain to me what ‘spooning’ was – she’d made the mistake of saying that when she was young, her mum didn’t want her to go to dinner at a newly married couple’s place since they might be ‘spooning’. Na was thinking only of cuddling or kissing. (I’d say ‘canoodling’ for that. I must have picked that up from either mum or dad.)

Mum was sometimes ‘bushed’ or had ‘cabin fever’ – do they say that in Manitoba, I wonder? Mind you, if we were late getting ready to go out, we’d have to ‘get on our horses’. (But maybe that was from all the cowboy movies? No, maybe not; my parents never saw those till we had TV.) Before going out, of course, mum and I would have ‘made ourselves beautiful’. In fact, till the end of her days, mum would ‘put on her face’ before leaving the house, not that she ever wore that much makeup.

Since we lived in southwestern British Columbia, where my father was born, there were a few familiar western phrases he used that we picked up. As kids, we were often ‘antsy’ (fidgety, suffering from ‘ants in our pants’) on a drive to the ‘salt chuck’ (a Chinook expression meaning the ocean), or Dad said some big shot was a ‘high mucky muck’ (more Chinook) or some young guy was a ‘greenhorn’, someone new to a place or a job, or most often, a ‘low man on the totem pole’. When we didn’t behave, our parents would threaten to ‘lower the boom’ on us which when I was quite little I associated with all the log booms around, not sailing ships. And, of course, even today my plans often don’t ‘pan out’; still I know there’s gold out here.

There were a few expressions we wouldn’t likely use now, like ‘gypo outfit’, meaning a dishonest or a very small company apt to do a ‘midnight flit’ (a quick exit out of town ahead of the creditors), although originally a ‘gypo outfit’ here was usually a small, precariously financed logging company, I think, since the ‘men’ and the equipment would move around a lot to work and since the loggers might never collect all their pay.

A few sayings we used all the time; I don’t remember others using these. When we quizzed dad about why he was going out at night, he’d say he was ‘off to see a man about a dog’. This has ever since been a familiar quip in the family (in our case meaning ‘never you mind’ or ‘wouldn’t you like to know’). My son once very seriously asked me why we said this. I do hope he didn’t wish for a puppy every time he heard it. (We only ever had cats, and fish, and once, a guinea pig.)

My brother was sometimes labelled ‘Wrong Way Corrigan’, when he persisted in doing things his way, not my parents’ way. We must have asked for an explanation of that because I remember my parents saying that in the 1930’s, Corrigan, an airplane pilot, had flown from the eastern U.S. coast to California, but arrived in Ireland instead, all the way across the ocean, supposedly by mistake.

Since my parents had been in the army, they had picked up some expressions in their travels – we were used to being told to pick up our rooms ‘PDQ’, or to doing something on the ‘QT’ (which could mean quietly or secretly or slyly) or to hearing that something was ‘buckshee’ (free) – and my dad usually used what I thought of as Army time – the 24 hour clock – which I just didn’t get at all when I was a kid!

One or two expressions were ours, for sure. I can remember my mum teasingly asking did I want some ‘psgetti’. I couldn’t say ‘spaghetti’ for years apparently; when I tried, it came out that way. When we had a little spill, she’d say ‘oh, fall down, go boom’ which I certainly said to my own kids and even my grandson. Wonder if they’d remember?

Then there was ‘now we know’. One neighbour didn’t hesitate to ask about things – like why was that rusty old car parked in the back of our yard or who were those people who came to dinner. Once we answered, she’d say, ‘now we know’. My mum and I soon adopted this as a fine finish to any story.

The finest family phrase I ever coined though was ‘a little squirt in a big pond’ (instead of a ‘big fish in a little pond’). You can guess who the squirt was ... This description came to me during one of several trips to the Seattle World’s Fair in 1962. Despite mum’s putting my brother in a red jacket so he’d be highly visible, we were always, always running left and right and in circles looking for him (like 'chickens with our heads cut off').

The best one now though is my little brother’s – I think it was a typo – a few years back he signed himself as ‘your baby bother’ and so he’s been ever since!
Posted by M. Diane Rogers at 8:19 AM